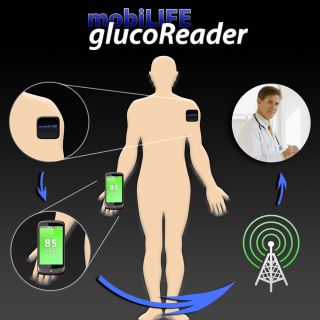 They all knew somebody with diabetes: grandparents, friends, even a girlfriend. Such close contact with the disease drove the four engineering students to form a startup around a painless, wireless monitor that could change the lives of the 26 million Americans with the disease. Their invention might also revolutionize a self-diagnosis industry worth billions of dollars.

The device, called the GlucoReader, can constantly check blood sugar levels for diabetics without the pain of finger-stick methods or the cost of more expensive monitoring devices. It also recruits smartphones and Web-based programs to transmit the information to both family members and physicians.

"We're looking into this device as something that you put on in the morning and take off at night," said Brian Chan, president and founder of the startup MobiLIFE.

One-third of Americans may have diabetes by 2050, according to projections by the Centers for Disease Control and Prevention.

Drawing blood is no pain

The big innovation in GlucoReader comes from using tiny microneedles to draw blood, as opposed to their traditional use in delivering drugs without the painful injections. The method is painless compared to pricking a finger to draw blood, and can be worn as a patch on a person's shoulder.

By contrast, more expensive continuous glucose monitors on the market merely draw fluid from the body and still require finger-stick tests as backup. MobiLIFE's new device holds the promise of eliminating the pain and boosting the comfort of users, as well as giving more accurate readings.

Type 2 diabetics, whose bodies don't produce enough insulin, could use the GlucoReader to spot-check their blood sugar levels after eating. But Type I diabetics, who can't create the insulin necessary to break down sugars such as glucose, need constant monitoring to get regular doses of insulin.

"Type 1 diabetics require these readings throughout the day at 5- to 10-minute intervals to sync up with an insulin-delivery system," Chan told InnovationNewsDaily. "They're not receiving the most efficient and best system possible."

GlucoReader's patch also holds a Bluetooth device that transmits the blood test data wirelessly to a mobile device such as the iPhone or Android smartphone. That could replace the wired-up monitor system that some diabetic patients must wear at all times.

The price is right

Accurate readings also matter in terms of expenses for Type 1 diabetics who require constant monitoring. Insurance companies don't cover continuous glucose-monitoring devices because they are not considered reliable replacements for the usual finger-stick tests. That makes such devices a pricey proposition with costs ranging from $1,000 to $3,000.

The MobiLIFE co-founders estimate that GlucoReader will cost about $500 or $600. The device would also be covered by insurance, as long as the startup can show that its results are accurate enough to replace the finger-stick method.

MobiLIFE continues to tackle engineering challenges such as reducing the power consumption of the Bluetooth transmitter in the patch. It is also refining the ideal size and shape of the microneedles as it moves from blood tests to animal tests in the next six months.

The startup has also begun looking for angel investors as well as applying for grant funding from various government, academic and nonprofit organizations. If it all comes together, MobiLIFE stands to do well by everyone.

"As a small company, we're able to use recent technology to scale down and reduce the cost and footprint of our device," Chan explained. "The cost savings go back to the consumer."

MobiLIFE represents one of 15 student teams or startups showcased in the Open Minds competition hosted by the National Collegiate Inventors and Innovators Alliance in partnership with the Lemelson Center for the Study of Invention and Innovation. The public event took place at the Smithsonian's National Museum of American History in Washington, D.C., on March 26, 2011.