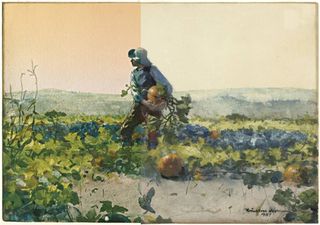 This image shows the 1887 Winslow Homer painting "For to Be a Farmer's Boy" as it now appears (right) and a digital recreation of the original coloring (left).
(Image: © The Art Institute of Chicago)

In the above depiction of Winslow Homer's "For to Be a Farmer's Boy" (1887; Gift of Mrs. George T. Langhorne in memory of Edward Carson Waller, AIC 1963.760), the right side depicts the colors of the work as they now appear, while the left side reveals a digital recreation that shows how the masterpiece appeared before its paint faded.

The faded sky of the original had been a mystery to art experts for decades, as its unremarkable shading was not what one would expect from an otherwise detailed painting from a master of color and shading.

The original colorants in Homer's work are what experts call "fugitive", because they vanish when exposed to excessive light. Such colorants can be misleading, as latter observers never see the original tones and can misinterpret the shadings in a scene.

One trait of Homer's works is an astute use of color for depictions of the sky or water, so the sky depicted in the work above proved confusing. As part of NSF's Chemistry and Materials Research in Cultural Heritage Science program, curators at the Art Institute of Chicago and researchers at Northwestern University used Surface Enhanced Raman Spectroscopy to detect trace amounts of pigments that, because of their decay, are commonly undetectable by other techniques.

Using the spectroscopy technique, the researchers identified the pigments originally present in the artwork and were able to create the true-color simulation seen in the left-hand side of the above image.

Read more about the effort in the Behind the Scenes story appearing this Friday (April 2): Capturing The Fugitive.