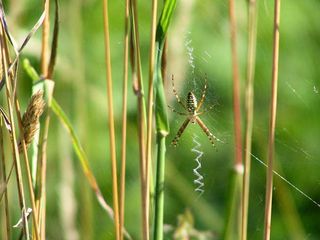 A male orb-web spider leaves behind a post-coital gift that helps to ensure that any subsequent offspring are his. He leaves the tip of his genitals in the females' sexual orifice, effectively blocking future males' efforts to inseminate the female, new research shows.

The behavior damages the males' genitals while corking up the females' potential for lengthy and therefore successful subsequent mating, says Gabriele Uhl of the University of Bonn.

The corking behavior occurs in orb-web spiders (Argiope bruennichi) and some other closely related spiders, all of which are considered to be sexually cannibalistic spiders because the females often end sexual encounters by attacking and killing male partners who fail to escape in time.

So Uhl's colleague Stefan Nessler, now at the University of Hamburg, set out to weigh the comparative advantages of the males' behavior--was it to ensure paternity or a life-saving maneuver or both?

The result was that the breaking-off of the genital tips had no effect on males' survival rates, but it did affect any subsequent copulation between the females and follow-on males. When the sexual orifice was blocked, the game was over in only eight seconds, Nessler said. Normally, male spiders copulate for twice as long.

"The results show that the blockage at least impedes copulation," Nessler said in a prepared statement. "Initial morphological studies show that the detached tip plugs the orifice so securely that the transfer of [the subsequent spiders'] semen is probably largely excluded."

The study, by Uhl, Nessler and their colleague Jutta Schneider of the University of Hamburg, is detailed in the January/February issue of the journal Behavioral Ecology.