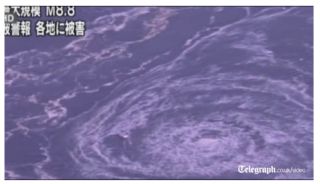 Whirlpool created by the earthquake off the coast of Japan, March 11, 2011.
(Image: © Daily Telegraph )

The tsunami that hit northern Japan today created an enormous whirlpool in a harbor off the east coast of that country. According to researchers, whirlpools aren't unusual after waves of this size.

The tsunami was triggered by an 8.9-magnitude earthquake that struck off the coast of Japan at 2:46 p.m. Tokyo time. Video footage shows a boat swirling in the massive eddy. It's not known whether anyone was on the vessel.

Based on eye-witness accounts and video in recent years, whirlpools probably occur with some regularity after large tsunamis, said Ruth Ludwin, a retired seismologist at the University of Washington in Seattle.

"Whirlpools have a big impact on the human imagination," Ludwin said. "They're very notable and very frightening. But from the perspective of the geological record, they don't leave any particular sign that has been recognized so far."

Whirlpools happen because of the interaction between rushing water and the geology of the coastline and seafloor, Ludwin said.

"Obviously there is a lot of water that is being pushed around, and it is interacting with the shape, the bathymetry, near the coastline," she said. [Album: Monster Waves]

"When a tsunami impacts the shoreline, some water overtops the shoreline and advances on the dry land in a manner somehow similar to a dam break wave," Hubert Chanson, a professor of hydraulic engineering and applied fluid mechanics at the University of Queensland in Australia, told LiveScience. "This was seen during the December 2004 tsunami in Indonesia and Thailand, as well as on Friday, 11 March 2011 in Japan. At the same time, the impact of the tsunami waters on the coastline induces some very intense turbulent motion, and, with a suitable bathymetry, a large whirlpool may develop."

The first images and videos of post-tsunami whirlpools came out of the 2004 Indian Ocean tsunami, Ludwin said. But eyewitness accounts from previous coastal quakes suggest that tsunami whirlpools are nothing new. One was reported in the great Lisbon earthquake of 1775, Ludwin said. The Haida people of the Queen Charlotte Islands off the coast of British Columbia have myths about a whirling wave of foam.

Apela Colorado, Ludwin's colleague with the Worldwide Indigenous Science Network in Hawaii, has identified a petroglyph in southeastern Alaska that seems to show a whirlpool in the body of a sea monster. In an abstract presented at the 2006 meeting of the Seismological Society of America, Colorado and Ludwin describe the native myths about that monster. According to ancient tales, they wrote, the creature "inundates canoes, makes the salt-water boil, swallows fishermen, pushes fish into a cave, and creates a canoe passage by flopping across a spit."