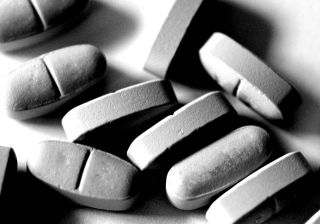 Weekly use of ibuprofen may decrease your risk of developing Parkinson's disease, a new study suggests.

People who took ibuprofen at least twice a week were 38 percent less likely to develop Parkinson's disease over the six-year study than people who didn't take the painkiller, said study researcher Dr. Xiang Gao, a researcher at the Harvard School of Public Health in Boston.

"This could be due to some unique effects of ibuprofen on [the central nervous system]," Gao told MyHealthNewsDaily.

But people should not start taking ibuprofen only to reduce their Parkinson's disease risk, because health risks come with long-term use of the drug, Gao said. And more research is needed to determine if its use is the direct cause of the decreased Parkinson's risk, or if other factors are at play, he said.

The study was published online today (March 2) in the journal Neurology.

Gao and his colleagues studied data from more than 136,000 people. The participants also reported their use of ibuprofen and other nonsteroidal anti-inflammatory drugs (NSAIDs).

At the end of the six-year period, 291 people had been diagnosed with Parkinson's disease.

Those who took ibuprofen at least twice a week were 38 percent less likely to develop Parkinson's than people who didn't take it, the study said.

And when the findings are combined with the results of other studies, it emerges that people who take ibuprofen have a 27 percent lower risk of developing Parkinson's disease, compared with people who don't take the drug, Gao said.

Looking at the causes

The exact cause of Parkinson's disease, which is characterized by muscle tremors and difficulty walking and moving, is unknown. Past studies suggest it is associated with the absence of the chemical messenger dopamine, as well as damage to the nerve endings that make the neurotransmitter norepinephrine, according to the Mayo Clinic.

It could be that ibuprofen protects against Parkinson's disease by stopping inflammation that spurs the loss of dopamine, the study said.

While the study convincingly showed that ibuprofen use is associated with a decreased risk in Parkinson's, a causal relationship still has yet to be demonstrated, said Dr. James H. Bower, of the Mayo Clinic in Rochester, Minn., who wrote an editorial about the study.

"One explanation for the association that they found is what everyone would like to believe: that it actually is protective," Bower told MyHealthNewsDaily. "That'd be great, and that's a possibility, but there are other possibilities that could also explain the association."

For example, people who have gastrointestinal problems tend to have a greater risk of Parkinson's disease than people with healthy digestive systems, Bower said. And those same people may also shy away from taking ibuprofen because the drug is known to increase the risk of such problems, including internal bleeding and kidney failure, he said.

Or, hypothetically, there may be a gene that protects people from Parkinson's disease that's located right next to another gene that makes people more likely to have osteoarthritis, Bower said.

So people who develop osteoarthritis may take a lot of ibuprofen to relieve the arthritis pain. But that ibuprofen intake wouldn't actually be related to Parkinson's risk, he said.

It's also hard to pinpoint any one factor that decreases Parkinson's disease risk because the disease develops over such a long period of time, Bower said.

The side effects of long-term use of ibuprofen still outweigh the potential benefits of the drug in preventing Parkinson's, Bower said. But if the study’s findings are replicated in future research, ibuprofen-like drugs (without the side effects) could be a promising preventive treatment for Parkinson's disease, he said.

Pass it on: Weekly ibuprofen use is associated with a decreased risk of developing Parkinson's disease.