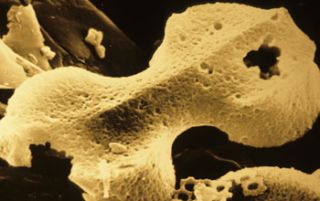 An expansive megadrought that parched ancient Africa and southern Asia about 16,000 years ago was one of the most intense and far-reaching dry periods in the history of modern humans, new climate research indicates.

The drought hit almost all of southern Asia and most of the African continent. During the drought, Africa's Lake Victoria — the world’s largest tropical lake and the source of the Nile — dried out, as did Lake Tana in Ethiopia and Lake Van in Turkey. And monsoons from China to the Mediterranean brought little or no rain.

By looking at climate records, including samples of ancient sediments taken from Lake Victoria and Lake Tanganyika in Tanzania, the researchers pegged the timing of the megadrought to the peak of a 3,000-year period when icebergs and their meltwater surged into the North Atlantic. This change in the ocean, which occurred as the last ice age came to a close, appears to have had effects at the tropics, the researchers write in the Feb. 25 issue of the journal Science.

The exact cause of the harshest megadrought in at least the past 50,000 years, however, remains unclear.

Previous research points to a southward shift in the Intertropical Convergence Zone, where winds meet near the equator, creating a tropical rain belt. The southern shift would have starved the region of rainfall it would otherwise have experienced. However, evidence collected in this study suggests that such a shift could not explain the expanse of the drought, according to the authors, who were led by Curt Stager of Paul Smith's College in New York and the University of Maine, Orono.

They suggest, that in addition to the convergence-zone move, the tropical rainfall systems over Africa and Asia must have weakened dramatically, perhaps in response to cooling sea surface and less water evaporating off it. [World's Weirdest Weather]

The next question, of course, is whether an extreme megadrought could strike again in our warming world.

"There's much less ice left to collapse into the North Atlantic now, so I'd be surprised if it could all happen again – at least on such a huge scale," Stager said in a statement.