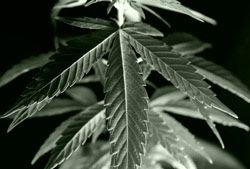 The active ingredient in marijuana, called delta-9-tetrahydrocannabinol (THC), increases the appetites of advanced cancer patients and improves their sense of taste, according to a new study.

Marijuana has a reputation for giving healthy people "the munchies," but the study shows it also has this effect in cancer patients, said study researcher Wendy Wismer, a food scientist at the University of Alberta in Canada.

"The fact that they did get hungry and enjoyed their meals is a huge improvement in quality of life," Wismer told MyHealthNewsDaily.

Patients with advanced cancer often experience a wasting syndrome, in which they burn through their calories at a higher rate than people without cancer, but at the same time lack an appetite, she said. This study shows that THC could help keep wasting syndrome at bay, Wismer said.

The study was published today (Feb. 22) in the journal Annals of Oncology.

Wismer and her colleagues gave THC pills or a placebo to 21 advanced cancer patients whose disease had affected their eating habits for two or more weeks. Pharmacists gave THC pills to 11 patients THC pills and placebo pills to 10 patients. Neither the patients nor the pharmacists knew which pills were placebos and which contained THC, the study said.

Patients taking THC took 2.5 milligrams of the compound twice or three times a day for 18 days, the study said.

Loss of appetite is a common problem for cancer patients and anything that can help remedy the problem will improve their quality of life, said Dr. Joanne Mortimer, director of the women's cancers program at City of Hope Cancer Center in Los Angeles, who was not involved with the study.

Cancer treatments can make patients feel nauseous so they can't keep anything down, she said. And some types of cancers promote release of hormones that cause the patient to have no appetite and feel full fast, Mortimer said.

Marijuana is already known to improve symptoms of nausea in cancer patients, so it's interesting that THC can also function as an appetite-inducer, she said.

Next, the findings should be tested in larger studies with more patients, the researchers said.

Pass it on: The active ingredient in pot may improve cancer patients' appetites.