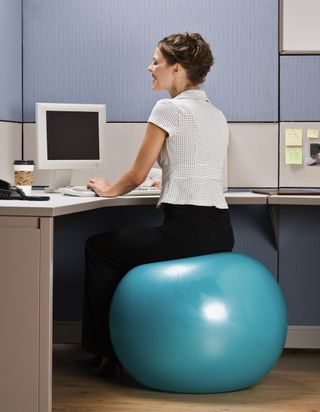 Combating the negative health effects of a sedentary lifestyle could be as easy as turning paper-pushers into pedal-pushers, a new study finds.

Portable pedal machines designed for under-the-desk use can help employees exercise while they work, according to the research, which field-tested the machines on a small group of office workers in Rhode Island.

In fact, the idea of the machine was so appealing that the researchers had to turn away 90 percent of potential study volunteers because they only had the money to buy 18 pedal machines.

"I had 170 people respond to my advertisement within 48 hours," study author Lucas Carr, a professor of exercise and sport science at East Carolina University, told LiveScience.

Pedal to the metal

Pedal exercisers are already sold for as little as $20 or $30 online (though a good-quality one will cost you a few times more than that, Carr said). They could help counteract Americans' dangerously sedentary lifestyles, but no one had taken a systematic look at whether office-bound workers like them or whether they end up gathering dust in a corner, Carr said. For the new study, published online today in the British Journal of Sports Medicine, Carr and his colleagues set up machines for 18 healthy female office workers (average age: 40) and then "let them go for four weeks," he said.

The pedal machines recorded information about how long the employees pedaled each day. After the month was up, the volunteers filled out a survey about how much they liked the machine and whether they would use it long–term.

On average, the women used the machines 12 out of a possible 20 working days, the study found. Time pedaled per day varied from one minute to 73 minutes, with the average being 23 minutes. The most enthusiastic peddler burned an extra 500 calories a day according to the machine, though the average was about 180 calories per day.

Most importantly, Carr said, people liked the machines. Almost everyone said they would use them if their employer offered; they also overwhelmingly reported that the machines were quiet and didn't distract them from their work.

The number of volunteers who used the machine regularly did decline over the four weeks. That's not surprising, Carr said, as they were given no outside motivation or incentives to keep pedaling. He's now working on a larger follow-up study, set to launch March 1, that will provide pedal exercisers to 60 office workers. This time, Carr and his colleagues will include motivational messages and information on the dangers of sedentary behavior. The idea is to find out if widespread deployment of portable pedals will improve employee health.

"Sitting for more than four hours at a setting is just extremely bad for your health," Carr said. People may not work up a good sweat at their desks, he said, but "if they're going to be sedentary regardless, this is just a good way to augment physical activity."

The study was funded by the National Institutes of Health.