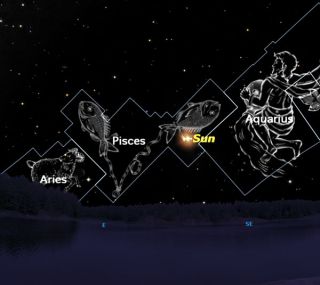 Figure 2. If you were born between March 21 and April 19, your astrological sign is said to be Aries. But this was only true for a while, back when the system was set up in 600 BC. Today, the Sun is no longer within the constellation of Aries during much of that period. From March 11 to April 18, the Sun is actually in the constellation of Pisces!

India's Bombay High Court has ruled that astrology (which took a recent and very public drubbing after an astronomer pointed out that astrological signs have changed over millennia) is not merely a harmless diversion but instead a science, presumably on par with biology, astronomy and physics.

In its decision the High Court cited testimony from a government deputy drug controller named Dr. Ramakrishna, who stated that the Act did not apply to astrology: "The said Act is aimed at prohibiting misleading advertisements relating to drugs and magic remedies. The Act does not cover and/or relate to astrology and/or allied sciences like Palmistry. ... In view thereof, a purported ban on practices promoting astrology and related sciences sought by the petitioner, which is a time-tested science more than 4,000 years old, is totally misconceived and unjustifiable."

There are many ways in which astrology is clearly not a scientific enterprise. For example, real sciences (and scientific theories) have predictive power; that is, they can make accurate and valid predictions about the future. Astronomers, for example, can accurately predict a wide variety of celestial events, from the next full moon to the next appearance of Halley's comet (July 28, 2061). Astrology, by contrast, has failed repeated scientific tests for making accurate predictions. Furthermore there is no physical mechanism known to science by which the position of planets and stars could possibly have any influence on a newborn's personality traits.

The High Court's legal ruling, of course, carries no weight with scientists, who have uniformly and soundly rejected astrology as a pseudoscience. The justification that Dr. Ramakrishna provides (that astrology is "over 4,000 years old" and therefore must be valid) is itself a blatant logical fallacy called an appeal to tradition. Just because something has a long tradition, or was widely practiced throughout history, does not imply that it is valid or correct. Since ancient times people believed that diseases were caused by imbalances in the body's humors (black bile, yellow bile, phlegm and blood), and were "cured" by doctors using applications of leeches to the body. By Dr. Ramakrishna's logic, this discredited science of "humorism" must be valid, since it too was used for thousands of years. That such a clearly illogical argument was cited by the Bombay High Court does not speak well for its judicial wisdom.