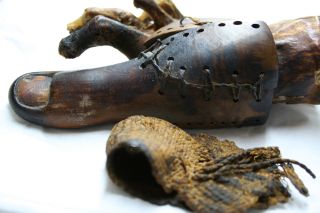 The original Cairo toe, made out of wood and leather, is housed at the Egyptian Museum in Cairo. The toe was found attached to a female mummy.
(Image: © The University of Manchester)

Two false mummy toes from Egypt may have actually strutted their stuff as functional big-toe prostheses for their owners, researchers have found.

The two toes — the Greville Chester housed in the British Museum and the Cairo toe at the Egyptian Museum in Cairo — date back to before 600 B.C., which the researchers say is much earlier than what had been considered the earliest known practical prosthesis (called the Roman Capua leg dating to around 300 B.C.).

"We may just have the evidence to suggest that nascent prosthetic science was beginning to emerge in the Nile valley many hundreds of years earlier than in ancient Capua [where the Roman prosthesis was found]," the researchers wrote in the Feb. 12 issue of the journal The Lancet. "Perhaps now attribution for the first glimmers of this branch of medicine should be firmly laid at the feet of the ancient Egyptians."

The Greville Chester toe, named after the reverend who discovered it in Thebes near present-day Luxor in Egypt, is made of cartonnage, which is a type of papier maché made by soaking linen in animal glue and painting it with tinted plaster. It is shaped like a right big toe and at one time held a false toenail. The artificial toe shows considerable signs of wear, the researchers said, including signs of rubbing.

Unlike the ownerless Greville Chester, the Cairo toe was found fastened onto the right toe of a female mummy identified as Tabaketenmut who lived some time during the period from 950-710 B.C. "Tabaketenmut may have had diabetes, which could have caused ischemic gangrene in the toe. The stump subsequently healed without the need for stitches," the researchers wrote.

The toe had certain features, such as a simple hinge, that might have served to mimic the toe joint, including a chamfered, or beveled, front edge, and a flattened underside for stability. Both toes sported eight lacing holes on the inner edge and four on the outer, likely to attach the toe onto the foot or fasten it onto a sock or sandal, the researchers suggested.

"The wear on the Greville Chester toe and the important design features on the Cairo toe led me to speculate that these toes were perhaps worn by their owners in life and not simply attached to the foot during mummification for religious or ritualistic reasons," researcher Jacky Finch of the University of Manchester said in a statement.

But plenty of evidence from mummified remains would suggest ancient Egyptian embalmers made every attempt to restore a complete body before burial, they wrote.

To test out replicas of the artificial toes to see if they were the real deal, the researchers recruited two volunteers who had each lost their right big toe.

The toes had to meet certain criteria to be classified as true prosthetic devices, the researchers said. The material had to be able to withstand someone's weight without cracking, and must look sufficiently lifelike. "The stump must also be kept clean, so it must be easy to take on and off. But most importantly, it must assist walking," the researchers wrote.

The participants wore the toes with replica Egyptian sandals. While the team didn't expect either toe – the Cairo or Greville Chester – to function exactly like the real thing, one volunteer walked extremely well with both toes, they found. Both volunteers said the Cairo toe was particularly comfortable.

"My findings strongly suggest that both of these designs were capable of functioning as replacements for the lost toe and so could indeed be classed as prosthetic devices," Finch said.