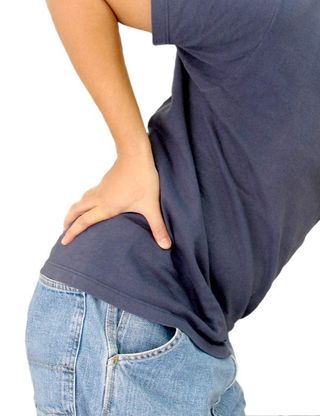 The longstanding advice to "sit up straight" has been turned on its head by a new study that suggests leaning back is a much better posture.

Researchers analyzed different postures and concluded that the strain of sitting upright for long hours is a perpetrator of chronic back problems.

Using a new form of magnetic resonance imaging (MRI), researchers studied 22 volunteers with no back pain history. The subjects assumed three different positions: slouching; sitting up straight at 90 degrees; and sitting back with a 135-degree posture—all while their spines were scanned.

Back pain, according to the National Institute of Neurological Disorders and Stroke, is the most common cause of work-related disability in the United States. It costs Americans nearly $50 billion annually. Sitting appears to be a major cause of this ailment.

"We were not created to sit down for long hours, but somehow modern life requires the vast majority of the global population to work in a seated position," Bashir said. "This made our search for the optimal sitting position all the more important."here

"We have to do something that is similar to the lying position," Bashir told LiveScience. Lying down in a relaxed position with your knees slightly bent is the best position that a person can be in, because it doesn't cause any stress on the ligaments, the thigh muscles as well as on the back.

Sitting on a chair that provides proper support, such as a slightly tilted back car seat, can mimic the relaxed supine position. Slouching caused a reduction in the spinal height which means that there was high rate of wear and tear in the lowest two spinal levels.

"This may be all that is necessary to prevent back pain, rather than trying to cure pain that has occurred over the long term due to bad postures," Bashir said.

The study was detailed today at the annual meeting of the Radiological Society of North America (RSNA).