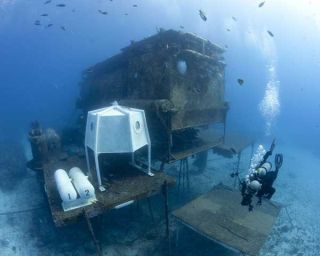 The Aquarius Reef Base, where Finelli and colleagues have lived for the last nine days.
(Image: © Stephen Frink, UNCW.)

From the cramped conditions inside a school-bus-sized metal tube at the bottom of the ocean, scientist Chris Finelli traded his scuba gear for a T-shirt and bare feet, ready to talk about his latest mission: monitoring sponges on Conch Reef, more than three miles off the coast of Florida.

Sponges, bottom-dwelling filter-feeders, are one of two players locked in a silent battle for supremacy that is taking place at these coral reefs and others across the globe.

As coral populations disappear — they're down by 90 percent around Florida — other species are fighting for the newly freed up ocean real estate. The two top contenders to take over are sponges and algae, and which one emerges victorious will have far-reaching consequences for the species that make their homes in coral reefs and for the humans that depend on them.

In the face of such serious subject matter, Finelli still worried he sounded a bit like Donald Duck, explaining that at 50 feet (15 meters) below the ocean's surface, the extreme pressure can make people sound like they've sucked in a hit of helium.

"You get used to hearing yourself in a funny voice when you're down here," said the University of North Carolina Wilmington associate professor.

Finelli, along with several UNCW grad students and technicians, has been living deep under water for nine days now, aboard the Aquarius, the only seafloor laboratory and habitat in the world. The National Oceanic and Atmospheric Administration (NOAA) owns the facility, which is run by UNCW.

Ocean researchers can conduct much longer dives from the Aquarius than are possible from a boat, and UNCW has been taking advantage of this since 1997, when this sponge study first got under way.

The research is partly focused on giant barrel sponges, which were recently revealed to be among the oldest living organisms on the planet. The largest of the species can grow up to 20 feet (6 meters) across and live up to 2,000 years.

Although the barrel sponges found on Conch Reef aren't quite that enormous, all sponges play an important role in maintaining water quality. Sponges filter about 100 times their own volume every hour, cleaning the ocean and moving nutrients through the ecosystem. They also provide a home for creatures in a way that is somewhat similar to coral reefs.

Algae and seaweed don't do any of those things though, said Joseph Pawlik, a UNCW professor, speaking from his office. If these plants win the ocean-bottom war, it could destroy valuable habitat.

"If you can't have corals, better that you should have sponges, rather than macroalgae," Pawlik said. And right now it looks like sponges in the area are winning out over algae and seaweed, he said. Over the last six years, he added, Florida has seen barrel sponges increase by 40 percent.

Finelli's findings seem to support this increase. The team discovered a huge number of young sponges within the 50-foot (16-meter) -diameter study area, something Finelli said was a nice surprise.

However, despite the marked increase in baby sponges the team found, Pawlik said, it's not clear whether the total amount of sponge biomass is increasing or decreasing.

"The interesting thing is we've also seen diseases take out some of the largest individuals on the reef," Pawlik said, so whether or not the sheer amount of sponge tissue in the oceans is increasing isn't known.

Finelli and his team will began the 16-hour decompression process on Wendesday of this week, and will swim to the surface on Thursday. After spending nine hours each day on dives, the team will need time for their lungs to adjust to life back on dry land.