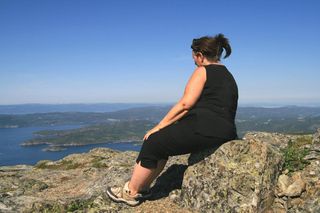 Weight gain is not just the result of an overly rich diet or genes that predispose someone to store fat, mounting research suggests. Rather, studies implicate a third, and more complex, factor – the interaction between our genes and what we eat.

That’s not to say poor eating habits have not contributed to expanding waistlines. Indeed, the growing obesity epidemic in the United States has been linked to lousy diets and lack of activity.

Genes may predispose some people to store fat more than others, but a low-carbohydrate diet, for example, can help some people overcome that tendency. Meanwhile, the same diet may be completely ineffectual for someone else trying to keep the pounds off.

"That's the bottom line: It's complicated and there is no quick fix ," said Laura Reed, an evolutionary geneticist at North Carolina State University and the author of a recent study exploring this concept in fruit flies. "Lots of people don't respond well to a given fad diet . It's likely that just about every individual is going to have a very different solution to the problem."

So, the low-fat, low-carbohydrate, Mediterranean-style diets– to name just a few – that we've been collectively experimenting with may all work, just not for everyone. [Check out, 7 Diet Tricks That Really Work .]

In a study published in the journal Genetics in July, Reed put fruit flies on four diets – their normal lab food, a calorie-restricted regime, a high-sugar diet and one fattened up with coconut oil. She looked at the results on traits like weight and the concentration of sugar in their hemolymph, the insect version of blood.

A population of fruit flies, or humans, collectively contains variations in DNA sequence for traits, but under stable conditions, these variations are hidden. However, an environmental disruption – like these altered diets – exposes this hidden genetic variation, as individuals react differently to the change based on their genes. This provides the raw material for evolution.

Reed saw evidence of this phenomenon most consistently among the fruit flies fed a high-fat diet. Some got heavier while others didn't, and some strains maintained their pupal survival rates, while others' survival rates dropped dramatically. This suggests that for creatures accustomed to living on fruit, a high fat diet is extremely disruptive.

In what Reed described as an unusual step, researchers were able to tease out genes' role in the increased range of traits they saw. In the case of the high-fat diet, they found that a significant portion of the increase in the variation could be attributed to genes.

The traits Reed studied in fruit flies are comparable to the symptoms of metabolic dysfunction increasing among humans, as we perform a much larger experiment on ourselves with a high-fat, high-sugar Western diet.

According to the Centers for Disease Control and Prevention, in the past 30 years, Americans have collectively become heavier, with most of the increase on the obese end of the scale. (Obesity has increased particularly rapidly since 1980.) Meanwhile, the percentage of people at the other end of the scale – those considered underweight – has decreased from 2.4 percent about 20 years ago to 1.8 percent currently.

Of course the full equation is more complicated than simply diet, genes and their interaction. Genes also interact with other genes. And sex, age, physical activity, smoking and other factors also play a role in whether you gain or lose weight, or whether your blood sugar or cholesterol spikes in response to certain foods or diets.

So teasing out causation can be difficult.

In work published in 2008, Maria De Luca, a geneticist at the University of Alabama, and her colleagues identified a gene in fruit flies that played a role in fat storage. They then located its human counterpart. Having two copies of a genetic variant of this gene had very different implications for the white and black women they then studied. White women with two copies of the so-called LAMA5 gene were more likely to have reduced body weight and reduced lean body mass, while black women with two copies had increased body weight and lean mass.

The reason for this difference wasn't clear. But differences in diet, environmental or genetic background may have come into play.

Despite these uncertainties, the message is clear: Context, more than genes alone, matters, according to De Luca.

While diet is not the only environmental factor interacting with our genes during our lives, it is the most important one, given that we must all eat, from conception to death, Jose Ordovas of Tufts University, wrote in a 2008 paper published in the journal Obesity.

This idea, that what we eat interacts with our genes and influences our health, forms the basis for nutritional genomics, which could one day supply us all with personal, or at least more targeted, dietary guidelines, rather than one-size fits all dietary recommendations.

"Nutritional genomics should be the driving force of future nutritional research, and it has the potential to change dietary disease prevention and therapy and have a major impact on public health," Ordovas wrote.

The personalized nutritional plans are still a way off, according to De Luca.

"There are a lot of studies that need to be done," she said. Researchers need to better understand the interaction between genes and our environment, as well as other factors that affect gene expression, she said.