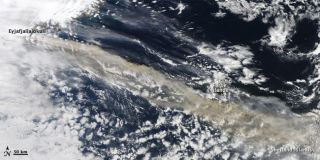 The vast plume of material spewing from this week's eruption of an Icelandic volcano is reddening sunsets and clouding skies across Europe. If the eruptions continue and get bigger — a possibility given the explosive history of Iceland's volcanoes — even the global climate could be affected. But the current eruption is too wimpy to have any significant impact, scientists say.

The eruption of Iceland's Eyjafjallajökull volcano may be treating European sky watchers to spectacular sunsets and hampering air travel due to the ash and gas it has spewed into the atmosphere. But "there will be no effect on climate," said Alan Robock of Rutgers University, who studies the effects of volcanic eruptions on climate.

The potential for Eyjafjallajökull to impact the Earth's climate is still there, however, if it begins to erupt more violently.

"If it has another eruption in the future, it could have an impact," Robock said.

When volcanoes erupt, they funnel ash, debris and gases into the atmosphere. One of these gases, sulfur dioxide, can react in the atmosphere to form sulfate aerosols, which are tiny particles suspended in the air. These aerosols can scatter the incoming rays of sunlight, not only producing colorful sunsets, but also changing the amount of solar radiation that reaches the Earth's surface, and therefore potentially altering global temperatures.

The catastrophic eruption of the Philippines' Mount Pinatubo in 1991, for example, caused global temperatures to be cooler than normal in the following year. The even larger eruption of the Tambora volcano in Indonesia in April 1815 caused what was called "the year without a summer," with snow falling across the United States in July in 1816.

But Eyjafjallajökull's eruption won't cause anything like that to happen, because it simply wasn't strong enough to send material up into the stratosphere, an upper layer of the Earth's atmosphere where particles hang around for much longer and so can have a longer effect. It also didn't blow out as much material as climate-altering eruptions — Pinatubo ejected about 20 megatons of material into the stratosphere. Eyjafjallajökull, on the other hand, ejected less than 1 percent of a megaton, Robock told LiveScience, and it all stayed in the troposphere, the lowest layer of Earth's atmosphere where we live and where the weather can clean out volcanic material from the atmosphere, bringing it down with rain.

"The eruption you've seen so far, there's nothing that's been put up in enough of an amount, not a huge plume, it's not nearly on the scale of Pinatubo we saw in the 1990s that actually did cause some cooling in the weather the following year," said Rick Wessels, a remote sensing geophysicist with the United States Geological Survey.

Eyjafjallajökull "would have to be more powerful to pump material into the stratosphere," Robock said.

Icelandic volcanoes have been powerful enough to impact the climate before, Robock noted. An eruption of a volcano called Laki in 1783 had "large effects on climate," Robock said. The explosion created a haze over Europe, recorded by then American ambassador to France, Benjamin Franklin, cooled temperatures globally and altered monsoon flows — a pattern of winds that changes seasonally — that created droughts and famines in Egypt and India.

So far, Franklin would be disappointed by this week's eruption.

"At this point it seems like a fairly moderate eruption," Wessels said. "If this is all we see I wouldn't expect lasting effects. If it escalates up or does what other Iceland volcanoes have done over the years it could have a major effect."