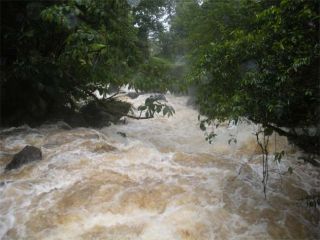 Puerto Rico, the island of enchantment, is home to the Tropical Ecology and Evolution Internship at El Verde Field Station, University of Puerto Rico. El Verde is located in the Luquillo Experimental Forest, better known to the locals as El Yunque National Forest.

El Yunque, the only tropical rainforest in the United States, receives over 200 inches of rainfall each year, resulting in a rich diversity of tree and plant species and many stream systems.

Recently, I participated in an internship through the Research Experience for Undergraduates (REU) program funded by the National Science Foundation and the University of Puerto Rico, along with eight other students from universities across the United States.

The day of our arrival on the Island, Alonso Ramirez, limnologist and director of El Verde Field Station, along with ecologist Checo Colon-Gaud, took us on a mesmerizing journey through El Yunque. They showed us the paths, pointed out plants that we should avoid, and taught us the history of the magnificent rainforest that I have come to love and respect.

I remember arriving at the hanging bridge that crosses the Sonadora stream and being struck speechless by its beauty. This awesome sight would become even more breathtaking later in the summer when I went to the bridge after a rainstorm; the powerful river surging before me was barely recognizable because the water level had risen drastically.

Just beyond the hanging bridge lay the Luquillo Forest Dynamics Plot, a single project within the Luquillo long-term ecological research (LTER) site that stretches along 16 hectares of rainforest. We walked down a narrow pathway into the LTER site, avoiding the research plots where data was being collected daily. From the abundance of shrimp assemblages in the streams to the diversity of fallen seeds from the canopy, everything in the LTER site is under investigation. We continued along the path until just beyond another smaller stream called La Prieta. For an aspiring ecologist, this place was heaven.

During my first week at El Verde, I reviewed literature about the research and in the second week I began my project. I found out that I would be conducting research with graduate student Sofia Burgos, investigating the effects of land use on tropical stream ecosystems, and determining if enzyme activity in the benthic biofilm (in this instance, a complex aggregation of microorganisms adhering to the river substrate) is a viable indicator of land-use changes. Unlike in the United States where streams are primarily altered by agriculture and non-point source pollution, streams in Puerto Rico are primarily altered by point source pollution from industrial and residential areas.

The difficulty in conducting research on streams in Puerto Rico during the summer months is always waiting for the rain to cease. We arrived at the island during the rainy season and were often hindered from field work due to flooding. You learn very fast that on the island a calm stream can quickly become a raging river. After several weeks of reviewing literature, proposal writing and waiting for the rain to stop, we were finally able to go into the field and collect samples.

We investigated nine streams in the Turabo Watershed, located in the center of the island. The streams ranged from predominately forested to highly urbanized. At each stream we measured the temperature, conductivity, turbidity, pH, nutrients, discharge, canopy cover, dissolved oxygen and reach length. And, we collected rocks covered in biofilm from the streambed for enzyme activity measurements.

The forested streams were generally natural looking and rich in riparian vegetation, while the urban streams were often channelized, very degraded and lacking in riparian vegetation. The results of this study revealed significant differences in biotic and abiotic characteristics of forested and urban streams. These results yield practical implications for assessing stream ecosystem integrity.

Throughout my research experience, Ramirez, Colon-Gaud and Burgos encouraged me to think more critically about environmental issues, particularly the effects of changes in land use on stream ecosystems. This invaluable experience has enhanced my understanding of stream functioning and bolstered my knowledge of methods used in aquatic ecology.

This will certainly prove useful in my future research at Kent State University. I strongly encourage biology and ecology students to apply to this phenomenal Research Experience for Undergraduates program. {Read Ashley’s blog to learn more about her experience.}