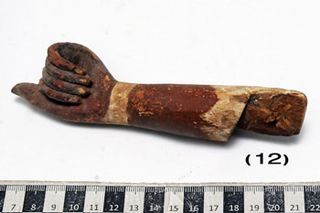 A delicately carved wooden hand, broken off from a piece of statuary. This hand was among 200 objects given to the Supreme Council of Antiquities by Al-Ahly Bank.
(Image: © SCA.)

A carved wooden hand and a marble head of a Greco-Roman god are just two of the 200 artifacts that had been stored away in the national bank of Egypt. The ancient pieces were just sent to the Supreme Council of Antiquities (SCA) this week, according to Farouk Hosny, the minister of culture.

The recovered collection was likely in the possession of foreigners who lived in Egypt during the late 19th and 20th centuries. These antiquities collectors had stored their collection inside boxes in the vaults of the Al-Ahly Bank, according to Tarek Amer, chairman of the bank. Since the early 20th century nobody had asked about the objects, so they remained under the bank's care until the executive board of the bank decided to offer the pieces to the SCA.

Other items from the vault included: limestone statuary heads of ancient Egyptian and Greco-Roman deities such as Horus, Hathor and Ptah, as well as Roman terracotta statues and 20 coins from the Islamic and Modern period, said Zahi Hawass, secretary general of the SCA. Hawass added that two archaeological and legal committees inspected the collection and confirmed the objects' authenticity.

The items are now stored in the Egyptian Museum, Cairo, for restoration and documentation.