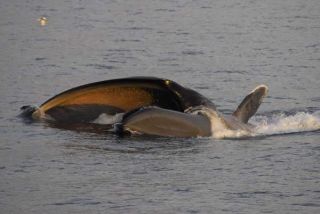 A blue whale feeding. It's turned on its side, so you can see its smaller lower jaw and open mouth, illuminated by the midnight sun. Taken in Hinlopenrenna, a channel north of Svalbard.
(Image: © Peter Prokosch)

The most exciting moment of the tour came when the boat met a school of blue whales in the Arctic Ocean.

"We saw at least three blue whales, which are the largest species ever to live on earth, and we watched them in the brilliant midnight sun, which was extremely exciting," said Peter Prokosch, managing director of the United Nation's Environment Program's Polar Centre GRID-Adrenal. "Other exciting moments were meeting polar bears, walruses, and other breathtaking nature."

The tour wasn't just any research expedition monitoring Arctic species, however — it was part of a new program at GRID-Adrenal called Linking Tourism and Conservation, and is designed to encourage support for conservation through tourism, giving people an up–close-and-personal look at nature while bringing issues such as declining biodiversity and climate change to their attention.

The trip, which began in Svalbard, Norway, and toured the Arctic Ocean, was one of two expeditions the program will lead this year, with the second trip planning to leave next month for a 20-day tour of Antarctica.

"Bringing people to these pristine, exciting destinations makes them really think about the big questions of our global life and leads to people caring more," Prokosch told OurAmazingPlanet.

The Antarctica voyage will begin near the Falkland Islands and the boat will sail out to the Antarctic Peninsula. Tourists will see enormous ice masses calving into the ocean, flocks of penguins, seals, albatross and whales. Seeing wildlife in Antarctica is especially thrilling, Prokosch said, because the species are extremely tame. "They don't have enemies, so you can be very close to them," he said.

Because these trips are designed to promote conservation, there is a large educational component to the excursion. Tourists help take mammal and bird observations and counts, which are then provided to polar institutions. They also hear lectures and presentations by scientists while on the boat. Tourists see firsthand the ecosystems and wildlife they learn about, as well as see the effects of climate change on the retreating glaciers and melting ice packs.

"People can both study the pack ice situation, and see the creatures that live there," Prokosch said. "People get a very concrete feeling that climate change is happening, and that in the Arctic it is happening faster than in other areas."

Trips are also limited to about 100 people, setting them apart from the luxury cruise liners that carry thousands of people, Prokosch added.

The idea for the trips came about three years ago, when GRID-Adrenal was trying to figure out how to get financial support for conservation. Worldwide spending on tourism is around $10 trillion, and tourists in general are interested in nature and protected areas — about 50 percent of tourists visiting a foreign country make use of national parks, Prokosch said.

When the project was first conceived, it sought solely to raise money for conservation, but has since expanded its aim to gain political and educational support. Prokosch said bringing political figures such as Hillary Clinton and UN Secretary-General Ban Ki-moon to the Arctic is helping to put the issue of climate change in the global spotlight.

Also, on the last Arctic trip, Prokosch said about 25 percent of the tourists committed to contributing to the Linking Tourism and Conservation project in the future. Additionally, they all signed a letter to the president of Tanzania encouraging him not to build a proposed road through the heart of the Serengeti, which Prokosch and other conservationists fear will destroy that ecosystem.

"It's these kinds of little actions that show that people, particularly while in these polar regions, can be made aware of biodiversity," Prokosch said.