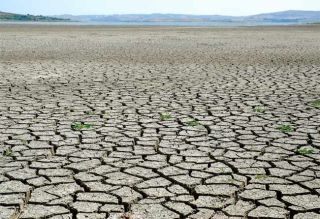 Scientists predict the western two-thirds of the United States will experience extreme drought conditions in the coming decades.
(Image: © Dreamstime.)

Extreme drought is likely in store in the coming decades for parts of the United States and the broader Western Hemisphere, scientists said today (Oct. 19), cautioning that we should expect dry conditions unlike anything seen in modern times.

"We are facing the possibility of widespread drought in the coming decades, but this has yet to be fully recognized by both the public and the climate change research community," said National Center for Atmospheric Research (NCAR) scientist and study team member Aiguo Dai. "If the projections in this study come even close to being realized, the consequences for society worldwide will be enormous."

Droughts can be associated with significantly reduced precipitation, dry soils that fail to sustain crops, and reduced levels in reservoirs and other bodies of water that can imperil drinking supplies. [Related: Man vs. Nature and the New Meaning of Drought ]

Earth will get drier

To make their predictions, Dai and his colleagues used a collection of 22 computer climate models, along with an index of drought conditions and previous research. They found most of the Western Hemisphere, along with large parts of Eurasia, Africa and Australia, will be at risk of extreme drought this century.

Higher-latitude regions from Alaska to Scandinavia are likely to become wetter during that time period.

Areas that could face significant drying during this century include: most of the western two-thirds of the United States; much of Latin America, including large sections of Mexico and Brazil; regions bordering the Mediterranean Sea, which could become especially dry; large parts of Southwest Asia; most of Africa and Australia, with particularly dry conditions in regions of Africa; Southeast Asia, including parts of China and neighboring countries.

The study also finds that drought risk can be expected to decrease this century across much of Northern Europe, Russia, Canada and Alaska, as well as some areas in the Southern Hemisphere.

Separately, scientists said yesterday that 2010 is tied for the warmest on record, part of a string of warm years over the past 15 years that scientists say are the result of a gradually warming world, as predicted.

Past research has shown that as greenhouse gases warm the air, it can hold more moisture, so the prevailing atmospheric flow moves more water vapor out of warmer, subtropical zones and into higher latitudes. The dry areas then become drier, and the wet become wetter.

However, the globe's land areas should be drier overall. "The increased wetness over the northern, sparsely populated high latitudes can't match the drying over the more densely populated temperate and tropical areas," Dai said.

Dai's conclusions may not surprise climate scientists. Previous research has suggested global warming will likely change precipitation patterns, with the 2007 assessment of the Intergovernmental Panel on Climate Change (IPCC) concluding that subtropical areas will likely have precipitation declines, with high-latitude areas getting more precipitation.

In a 2004 study, Dai and his colleagues found that the percentage of Earth's land area stricken by serious drought more than doubled from the 1970s to the early 2000s.

In his new study, Dai wanted to find out how climate change would affect future droughts. The team relied on the Palmer Drought Severity Index to indicate just how dry places might get. The index classifies the severity of a drought by tracking precipitation and evaporation over time and comparing them with the usual variability one would expect at a given location.

They fed projections about temperature, precipitation, humidity and other variables, which were based on projections of greenhouse gas emissions, into the Palmer model. A reading of +0.5 to -0.5 on the index indicates normal conditions, while a reading at or below -4 indicates extreme drought.

By the 2030s, the projections indicate that some regions in the United States and overseas could experience particularly severe conditions, with average readings over the course of a decade potentially dropping to -4 to -6 in much of the central and western United States as well as several regions overseas, and -8 or lower in parts of the Mediterranean.

By the end of the century, many populated areas, including parts of the United States, could face readings in the range of -8 to -10, and much of the Mediterranean could fall to -15 to -20. Such readings would be almost unprecedented, the team said.

Those numbers will mean different things depending on the location. "The impact on local ecosystems would be huge at any location for a persistent condition with a Palmer index of -4 or less," Dai told LiveScience. "But it could mean a Death Valley for currently semiarid regions, but may not be so in the currently moist tropics."

The new findings are detailed this week as part of a review article in the journal Wiley Interdisciplinary Reviews: Climate Change. The study was supported by the National Science Foundation, NCAR's sponsor.