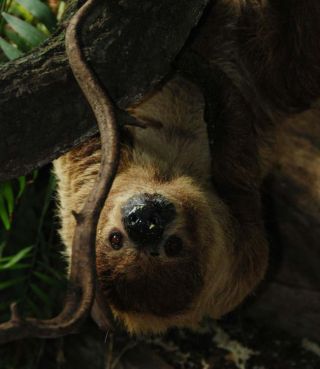 Prince, 25, a male two-toed sloth has gotten a case of the nerves after a female sloth was introduced into his zoo habitat. Like other sloths, Prince spends most of his time hanging upside down from tree branches.
(Image: © ZSL London Zoo.)

Sloths are slow by nature, taking a month to digest their food. They spend a lot of time hanging around. And, it seems, they can be slow to mate, too. Prince, a two-toed sloth, has yet to mate with blonde bombshell Marilyn even though the two have been zoomates since Easter, ZSL London Zoo officials said Thursday.

The male sloth Prince, 25, may have good reason for apprehension. His last mate turned out to be another dude. The story behind the story: It is notoriously difficult to determined the sex of a sloth, and only recently had advances in ultrasound led to the discovery that his original mate, Sheila, wasn't a "Sheila."

Zookeepers then replaced Sheila with the playful Dutch sloth named Marilyn in the hope that the zoo could successfully rear its first two-toed sloth baby in more than 100 years.

Prince and 3-year-old Marilyn are in the zoo's new Rainforest Life exhibit. It seems the presence of Marilyn has given Prince a dose of anxiety. So keepers have been leaving trails of fragrant herbs around for him to follow as a way to encourage him to move around the rainforest more and make friends.

"Two-toed sloths are very secretive creatures so we are never quite sure what they're up to but we like to encourage them to meet as often as possible," said senior zookeeper Lucy Hawley.

"It would be amazing if we were to have a two-toed sloth baby at ZSL London Zoo; we haven’t bred them since the 1800s so it would be a very special baby."

Two-toed sloths (Choleopus didactylus) are from Brazil and are classified as endangered by the IUCN Red List. They are usually brown in color, with lighter fur around the face and head. The hair grows from its belly to its back so that the rain in the forest will run off more easily. There are two claws on each front foot and three on the hind feet, which help them climb the trees. They spend much of their time hanging upside down from tree branches.

And since sloths take so long to digest food, storing it in their very large stomachs, they only come down from the tree tops once a week to go to the loo – which protects them from predators.