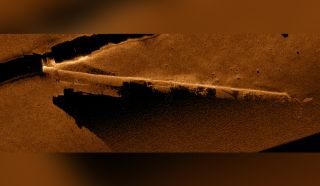 The wreck of HMS Urge was found at a depth of 430 feet (130 meters) off the coast of the Mediterranean island of Malta.
(Image: © University of Malta/Project Spur)

The wreck of a Royal Navy submarine that mysteriously disappeared with 44 people on board during World War II has been discovered off the Mediterranean island of Malta.

The discovery of HMS Urge suggests it sank in 1942 after hitting an explosive marine mine placed by an enemy German warship.

The wreck was found beneath 430 feet (130 meters) of water by researchers from the University of Malta, who have been working on an underwater survey of the island's territorial waters since the late 1990s.

Maritime archaeologist Timmy Gambin, who led the expedition, said that in 2017 Francis Dickinson, the grandson of the commander of the Urge, asked the university to help find his grandfather's missing submarine.

After carrying out historical research on the locations of minefields laid by the German and Italian navies — revealed after the war by naval records — the team moved their survey work to cover those areas in 2019, he said.

"In a way, it is a continuation of our survey, but on the other hand it was a bit more specific to the Urge," Gambin told Live Science.

Gambin and his colleagues deployed an autonomous underwater vehicle (AUV) to survey the area, spotting the wreck of the submarine over the summer; they then used a remote-operated underwater vehicle (ROV) equipped with a high-definition video camera to record details that could identify the sub, he said.

They sent the video to Britain's Ministry of Defence for verification; the Royal Navy recently confirmed that it was the Urge.

The Urge was a small U-class submarine, just 191 feet (58 m) long. The U-class subs were originally intended for training, but they were used in combat during World War II and proved highly capable.

The Urge was especially effective. Its captain, Lt. Cmdr. Edward Tomkinson, and his crew received medals for a string of successes, including sinking a German tanker supporting U-boats in the Atlantic Ocean, crippling the Italian battleship Vittorio Veneto and sinking the Italian cruiser Bande Nere, according to the Royal Navy.

The sub was also part of the submarine flotilla that harassed ships carrying supplies to German Gen. Erwin Rommel's Afrika Korps in North Africa, and it secretly landed British commandos and agents on enemy coasts. But the Urge left Malta on April 27, 1942, after the flotilla was posted to Egypt to escape the intense bombing of Malta — then a key British naval port — by the German and Italian air forces.

The submarine was bound for the port of Alexandria in Egypt — but it never arrived, and was officially reported missing at sea two days later, with 32 crew, 11 other naval personnel, and a war correspondent on board.

The submarine's captain, Tomkinson, was survived by a baby daughter, Bridget. When she married she became Bridget Dickinson, the mother of Francis Dickinson, who started the search effort.

Although the Admiralty concluded the Urge had run into an enemy minefield soon after leaving Malta, in 2015 a Belgian historian claimed to have discovered its wreck off the coast of Libya, where it was supposedly sunk by Italian warplanes.

That suggested that the Urge was far off its designated course when it sank, and that its commander may have disobeyed his orders.

But the confirmed discovery of the wrecked submarine about 2 miles (3 kilometers) from the coast of Malta, in a channel leading from the island, has now put that theory to rest, Gambin told Television Malta.

Catastrophic damage evident from the wreck of the Urge suggests it sank immediately to the seafloor after being struck by a mine laid by a German E-boat — a fast, small vessel used by the German Navy during World War II.

Gambin said that a length of the bow section at least 22 feet (7 m) long was detached from the rest of the vessel. "The damage to the bow shows a very violent explosion ... indicating that the ship would have sunk very fast, giving no chance to anybody to survive from this tragedy."

The Urge now lies upright on the seafloor with its bow partly buried in the seabed, but otherwise it is in good condition, he said.

Because people lost their lives in its sinking, the wreck is considered a war grave, and is protected under Maltese and international law, he said.

The detailed survey of the seafloor around Malta has now covered about 460 square miles (1,200 square kilometers) — a bit less than half of the island's territorial waters, Gambin said.

Most of the survey had been conducted since 2014 with an AUV that could dive to 1,640 feet (500 m) and stay underwater for up to 5 hours.The AUVhas detected several possible wrecks. "We are mapping whatever there is on the seabed, he said. "We have found everything from the 2,700-year-old shipwreck, to planes crashed in the sea during the Cold War."

The results of the underwater survey are now part of the Sintegram project, an effort funded by the European Union to unite geospatial data from Malta above and below the water, to enable future planners to take advantage of it.