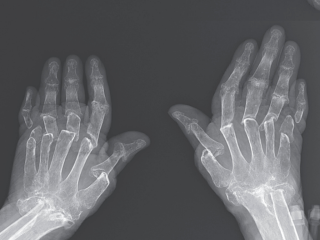 A rare condition known as "telescoping fingers" caused a woman's finger bones to shrink and disappear.
(Image: © The New England Journal of Medicine 2019)

A rare condition caused a woman's fingers to scrunch back into her hands as the bones of her hand and wrist steadily disappeared, according to a report of the case.

The bone loss caused the 69-year-old woman's fingers to buckle back into her hand like segments of a collapsing telescope, a distinct symptom that explains the unusual condition's nickname: "telescoping fingers."

An estimated 3.7% to 6.7% of people with a condition called psoriatic arthritis develop "telescoping fingers," according to a 2013 report in the journal Reumatología Clínica; the condition also occurs in people with rheumatoid arthritis, but even more rarely. When clinicians originally described the condition, in 1913, they called it "la main en lorgnette," or "the opera-glass hand." That term referenced the telescoping action of magnifying glasses used by theatergoers to enhance their view of the stage, according to a 1938 report in the Journal of Bone and Joint Surgery.

Related: 10 Medical Conditions That Sound Fake But Are Actually Real

In the recent case, described in a report published today (Dec. 11) in The New England Journal of Medicine, the woman's hands appeared severely deformed and swollen when she went to a rheumatology clinic in Turkey for treatment. The patient had been diagnosed with rheumatoid arthritis 18 years earlier, and over time, her knuckles had grown so swollen that her fingers skewed to one side, toward her pinky fingers, her doctors noted. Upon examining the patient's hands, the doctors discovered that the bones of her displaced digits seemed unusually short — far too short for the woman to properly flex her fingers or make a fist.

Radiographs of the patient's wrists and hands revealed the extent of the damage: The bones of the woman's fingers, hand, wrist and lower forearm appeared worn down, as if substantial amounts of tissue had disappeared. The doctors diagnosed the woman with telescoping fingers, medically known as arthritis mutilans, and attributed the tissue loss to a process called osteolysis, which causes bones to be "reabsorbed" by cells called osteoclasts.

Normally, osteoclasts help to sculpt bones from tissue generated by other cells and ensure that our skeleton fits together correctly as we grow, according to "Quantitative Human Physiology" (Academic Press, 2017). But when osteoclasts go haywire, the cells can eat up bone that should otherwise stay in place. In people with arthritis, osteoclasts may be prompted to attack bone cells by inflammatory substances present in the tissue, according to a 2007 report in The American Journal of Pathology.

In the 69-year-old patient, damage inflicted by overactive osteoclasts caused her bones to shrink. While the woman's fingers folded back into her hands, her skin didn't shrink to match, so the excess tissue bunched up in wrinkled folds. By gently pulling on the tips of the woman's fingers, her doctors were able to temporarily stretch the digits to their original lengths.

The doctors treated the patient with several common rheumatoid arthritis medications, as well as a medication intended to strengthen bone tissue. The treatment reduced the woman's overall pain and swelling but did not restore functionality in her hands.