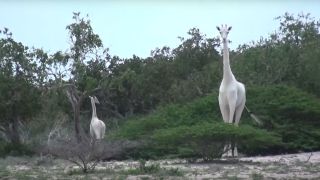 Rangers at a nature conservancy in Garissa County, Kenya, have discovered the skeletal remains of two rare white giraffes that went missing several months ago.

According to a statement issued on Twitter, the carcasses belong to a mother and her 7-month-old calf — two of only three white giraffes living in Ishaqbini Hirola Community Conservancy — and appear to have been there for  four months. All signs indicate that the animals were killed and butchered by armed poachers.

"This is a very sad day for the community… and Kenya as a whole. We are the only community in the world who are custodians of the white giraffe," Mohammed Ahmednoor, manager of the conservancy, said in the statement.

The poachers have not been identified, and their motive remains unclear. The Kenya Wildlife Service, the main conservation body in Kenya, is currently investigating the killings.

The white giraffes are not albino, the conservancy noted, but they have a condition called leucism, which causes a partial loss of skin pigmentation. Unlike animals with albinism, animals with leucism still produce dark pigment in their soft tissue cells, which is why the giraffes in this family have dark eyes and dark tail hair.

Leucism affects many mammals, but it is extremely rare in giraffes. Outside of this Kenyan giraffe family, only one other white giraffe has been spotted in Africa; it was  last seen in Tanzania's Tarangire National Park in January 2016, according to Kenya's Northern Rangelands Trust.

White or otherwise, all reticulated giraffes (Giraffa reticulata, the species found in the conservancy and throughout northern Kenya) are considered endangered by the International Union for Conservation of Nature. About 15,780 individuals remain in the wild, according to an estimate from the Giraffe Conservation Foundation (GCF). That represents a decline of about 56% from the roughly 36,000 estimated to remain in the wild 30 years ago. The main threats to their survival are loss of habitat (due to human activities) and poaching.