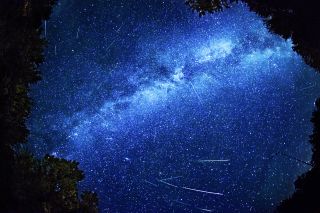 Two meteor experts are predicting that hundreds of meteors will grace the skies tonight (Nov. 21) in a rare event known as the "unicorn" meteor shower.

The alpha Monocerotid meteor shower happens every year between Nov. 21 and Nov. 23, but it typically lights up the sky with only a couple of meteors. It is unofficially dubbed the "unicorn" meteor shower because it can be seen in the night sky near the unicorn constellation, or Monoceros, according to CNN.

These meteors originate in the dust trail from an unknown long-period comet, or a comet that takes over 200 years to travel one time around the sun. Once in a while, this mysterious comet's trail of dust gets extra close to Earth's orbit and can create a bonanza of meteors, NASA's Ames Research Center scientist Peter Jenniskens and the Finnish Fireball Network's Esko Lyytinen wrote in a short technical paper. And conditions are right for just such a bumper crop of meteors to show up tomorrow, they said.

Because the dust trail lingers for a while near Earth's orbit, such outbursts of meteors are at least possible for the next few centuries, the experts wrote. Even so, the comet's trail only rarely gets close enough to Earth to create this spectacular display. The only other sudden outbursts occurred in 1925, 1935, 1985 and 1995.

This year, the comet's trail is close enough to create a meteor shower similar to the one in 1995, Jenniskens and Lyytinen wrote. If they're right, skywatchers may be able to glimpse from 100 to more than 1,000 meteors total in tonight's sky. The peak of the outburst will likely last for only about 15 minutes but could potentially last up to 40 minutes.

Those living in South America, eastern North America, Western Europe and northwestern Africa will have the best view, according to CNN. What's more, the moon has kindly gotten out of the way to make the view extra good. Tonight's crescent moon will shine relatively little light to drown out the spectacular sky show.

"There is a good chance to observe a short-lived outburst," the experts wrote. "Anyone who is going to try to observe should not be late at all."