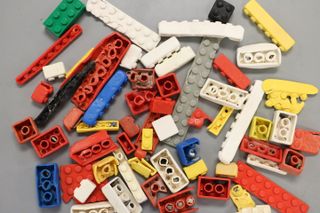 An assortment of weathered Lego bricks pulled from the ocean.
(Image: © Andrew Turner, University of Plymouth)

The ocean around the U.K. is strewn with Lego bricks.

Some of them were flushed there; one U.K. insurance company estimates that children flushed some 2.5 million Lego pieces down the loo between 2006 and 2016. Other bricks arrived there in 1997, when a wave slammed a cargo ship and dumped 67 containers of Lego bricks — or about 5 million pieces — overboard.

Some bricks still wash onto the shore on occasion, but most sink to the bottom — and there, a new study suggests, they will remain for a thousand years or more.

In a paper published Feb. 29 in the journal Environmental Pollution, researchers compared 50 castaway Lego bricks trawled from the coastlines of southwest England with 50 matching bricks that never left their boxes. Using X-rays and other analytic tools to measure how much of the marine bricks had weathered away, the team determined that a single Lego brick can survive in the ocean for anywhere from 100 to 1,300 years before totally degrading.

"Lego is one of the most popular children's toys in history, and part of its appeal has always been its durability," lead study author Andrew Turner, an associate professor of environmental sciences at the University of Plymouth in England, said in a statement. "However, the full extent of its durability was even a surprise to us."

Related: 6 doctors swallowed and pooped Lego minifigures so you don't have to

A rarity these days - a pair of Lego flippers still attached to their sprue, or doodah as Lego hunters call them, looking as good as the day they were made. Some 418,000 of these fell into the ocean in 1997. These were found today & have probably been buried in sand for decades. pic.twitter.com/AYbN7EaH89March 11, 2020

The washed-up Lego pieces for the study were donated to the university by a few volunteer beach-cleaning organizations in Cornwall, a county that borders both the English Channel and the Celtic Sea. One of those groups, called Lego lost at sea, specializes in collecting and identifying the iconic toy bricks. (The group's founder, Tracey Williams, is also a co-author of the new paper).

Because most Lego bricks are stamped with serial numbers, it was relatively easy for the researchers to date the sea-weathered bricks and then compare them with identical unweathered bricks obtained from local collections. Many of the underwater Legos dated to the 1970s and 1980s, the researchers said, and had suffered noticeable decay.

"The pieces we tested had smoothed and discolored, with some of the structures having fractured and fragmented, suggesting that as well as pieces remaining intact, they might also break down into microplastics," Turner said.

Some pieces had lost up to 40% of their original mass while at sea; others lost only 3%. Ultimately, the researchers said, the type and thickness of the plastic used in a given brick determined how quickly it decayed, but it's likely that the average Lego could remain intact in the sea for hundreds of years.

According to the researchers, these findings reinforce the message that people should be more thoughtful about how they dispose of used household items. (Please don't chuck your toys into the toilet or the sea.)

So, pour your soul into every Lego creation you make, because they may well outlast you.

Spring tides, onshore winds and a sea of plastic left behind. A Cornish beach this morning. #Cornwall #oceanplastic pic.twitter.com/BcGYRBIejLMarch 10, 2020