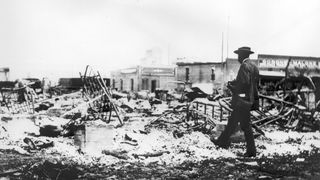 The remains of iron beds rise above the ashes of a burned-out block after the Tulsa Race Massacre, Tulsa, Oklahoma, in 1921.
(Image: © Oklahoma Historical Society/Getty Images)

A buried pit that could be a mass grave has been found in a cemetery in Tulsa, Oklahoma — and researchers think it could hold the bodies of black victims of a 1921 race massacre that was featured in the HBO television series "Watchmen."

The discovery could be of vital importance to an investigation being conducted by the city, ahead of the centenary of the massacre in 2021.

During the massacre, mobs of white individuals began setting fires to commercial buildings and houses throughout the entire Greenwood neighborhood of the city — a black community renowned for its prosperity, and nicknamed the Black Wall Street.

According to the Tulsa Historical Society, up to 300 people were killed — most of them black.

Related: In Photos: Evidence of a Legendary Massacre in Alaska

Amanda Regnier and Scott Hammerstedt, from the Oklahoma Archaeological Survey at the University of Oklahoma, told a city committee this week that scans with ground-penetrating radar in October had revealed the existence of the pit at Oaklawn Cemetery, northwest of the city's downtown area, according to a city statement.

The radar showed the buried pit measured roughly 30 feet by 25 feet (9 by 7.5 meters) — large enough to hold dozens of bodies, according to the researchers. Other traces of what could be unmarked graves were found nearby.

"We have large anomalies that appear consistent with mass graves … smaller anomalies that look like graves with coffins … and a series of other anomalies … that are more faint, and could represent individual people buried without coffins," Regnier told Live Science in an email.

At this stage of the investigation, the archaeologists aren't sure if the pit holds the bodies of victims of the 1921 massacre — that can only be determined by a full excavation by forensic archaeologists, which will need legal approval, Regnier said.

"We cannot know for certain what this is, but the signature closely matches those of other mass graves that have been excavated," she said.

Hammerstedt and Regnier are among a team of scientists investigating the Tulsa massacre ahead of the centenary.

They also conducted ground-penetrating radar scans at a nearby area called the Canes, near the Arkansas River in the city; those scans had also revealed buried areas that should be investigated further, they told the committee.

The team chose both areas after interviewing survivors of the massacre and Tulsa residents, as well as examining written documents and photographs, Hammerstedt told Live Science in an email.

The Tulsa race massacre started on May 31, 1921, after the arrest of a young black man, who allegedly assaulted a young white woman — a charge that was later dropped.

Widespread rioting and shooting broke out after opposing crowds gathered outside the city's courthouse after the arrest. The conflict rapidly worsened, fed by deep racial tensions between the city's white and black communities. According to some witnesses, even private planes were used in the attacks.

By the next day, a white mob had massacred hundreds of black people and burned down the Greenwood neighborhood of the city.

The massacre in Tulsa came soon after the "Red Summer" of 1919, in which white supremacists violently attacked black people in several U.S. cities. About 1,000 people were killed in the unrest.

For most of the 100 years since the Tulsa massacre, residents of the region rarely spoke of it, with some claiming their voices had been suppressed. But in recent decades, the state of Oklahoma and the city of Tulsa have sought to come to terms with this brutal part of history.

Oklahoma formed a commission in the mid-1990s to investigate what happened; it reported in 2001, acknowledging that the massacre took place, and recommending restitution for Tulsa's black community. But most of the recommendations were not made law, according to the statute.

The events of the Black Wall Street massacre are also central to the HBO television series "Watchmen," which is based on a team of superheroes that appeared in DC Comics in the 1980s.

The massacre itself was depicted in the pilot episode of the series, which aired in October. The final episode of the nine-part series aired on HBO on Sunday (Dec. 15).

Showrunner Damon Lindelof said he chose to reconstruct the 1921 massacre in Tulsa for the pilot because it was still relevant today.

"What is creating the most anxiety in America right now? And for me the answer is undeniably race," Lindelof told NBC News. "Superheroes cannot defeat racism."