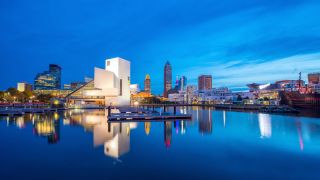 Downtown Cleveland skyline from the lakefront in Ohio.
(Image: © Shutterstock)

There are 24,800 COVID-19 cases in Ohio as of May 14, according to the state's department of health. Compared with other states, Ohio ranks in the top 50% of state numbers for U.S. coronavirus cases. At least 4,718 people with COVID-19 have been hospitalized in Ohio, with 1,268 of those admitted to the ICU.

There have been 1,534 coronavirus deaths in the state of Ohio. The first victim was Mark Wagoner, Sr., 76, a Toledo attorney who may have contracted the virus during a trip to California, according to WOSU Radio.

Ohio’s state health department has declined to provide information on outbreaks and deaths in the state’s nursing homes, but local media have found that more than 100 long-term care facilities have coronavirus cases. There have been at least 820 cases and at least 88 deaths in nursing homes, The Columbus Dispatch reported April 17. On April 27, the state changed guidelines for testing within long-term care facilities, prioritizing people who have been exposed but who are not symptomatic. Previously, only the symptomatic had been prioritized.

On April 30, The Columbus Dispatch found that 74% of new coronavirus cases reported between April 22 and April 29 were in nursing homes and long-term care facilities.

At least five prisons are under quarantine after cases of coronavirus have been found among inmates or employees. An outbreak is ongoing at the Marion Correctional Institution in Marion, Ohio, where nearly 2,000 inmates tested positive for the coronavirus as of April 20, 10TV reported. That is 78% of the prison population, according to News 5 Cleveland. One correctional officer and six inmates have died. Meanwhile, a second outbreak at the Pickaway Correctional Institution has infected 1,163 inmates and killed 21 inmates. A nurse at Pickaway named Tina Reeves died April 27 of COVID-19, according to the Ohio Department of Rehabilitation and Correction.

Despite stay-at-home orders, 100 protestors gathered on April 13 outside the Ohio Statehouse to express opposition to the state’s coronavirus shutdown measures. State Health Director Dr. Amy Acton has come under fire by protestors who have gathered at her home in Bexley, and the Ohio House has proposed legislation to limit her powers. Gov. Mike DeWine has said that he will veto any such legislation, WBNS reported.

Stores are set to open Tuesday (May 12) in Ohio. The state is launching a random test of 1,200 for active infection and antibodies to coronavirus in order to learn more about how widespread the virus has been during the pandemic so far, the Columbus Dispatch reported.

Timeline of coronavirus controls in Ohio

The COVID-19 crisis has led to two record-breaking weeks in unemployment in the state of Ohio, according to The Columbus Dispatch. The week ending March 20 saw 187,784 unemployment claims filed, followed by another 272,117 claims the week ending March 27. The week ending April 3 saw another 226,007 claims filed. On April 23, The Columbus Dispatch reported that nearly 1 million Ohioans had lost their jobs since the beginning of the pandemic shutdown. As of May 14, that number was 1.2 million, Cincinatti.com reported.

The arrival of the coronavirus threw a wrench into Ohio's presidential primary, which had been set for March 17. At a press conference on March 16, the governor announced that the election would not take place, and voting would be extended. The last-minute decision created a legal battle over whether the state had standing to delay the primary. State legislators ultimately settled on a plan to limit most in-person voting, but some people did not receive absentee ballots in time, The Columbus Dispatch reported April 24. The primary ended with about 20% voter turnout, WOSU reported, down from 41% in the 2016 presidential primary.

Editor's note: This article was updated to correct the name of the Ohio governor.