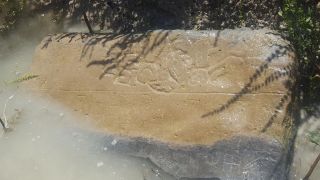 A local farmer discovered this stone half-submerged in an irrigation canal in Turkey. Inscriptions on the stone, dating back to the 8th century B.C. told the story of an ancient lost civilization in Turkey.
(Image: © Photo courtesy of James Osborne)

Last winter, a local farmer in southern Turkey stumbled upon a large stone half-submerged in an irrigation canal with mysterious inscriptions. The stone revealed the story of an ancient, lost civilization that may have defeated King Midas' kingdom of Phrygia in the late eighth century B.C., according to new findings.

Some months after discovering the stone, the farmer tipped off local archeologists to the stone's existence, according to a statement.

"Right away it was clear it was ancient, and we recognized the script it was written in: Luwian, the language used in the Bronze and Iron ages in the area," James Osborne, an archeologist and assistant professor of Anatolian Archeology at the University of Chicago, said in the statement. With a tractor, the farmer helped the archeologists pull the heavy stone block, or stele, out from the canal.

The stele was covered in hieroglyphs written in Luwian, one of the older Indo-European languages, according to the statement. The written language, made up of hieroglyphic symbols native to ancient Turkey, is read in alternating sequences from right to left and left to right.

"We had no idea about this kingdom," Osborne said. "In a flash, we had profound new information on the Iron Age Middle East." The stone tells the story of an ancient kingdom that defeated Phrygia, which was ruled by King Midas. According to Greek mythology, Midas turned everything he touched into gold.

A symbol on the stone indicated that it was a message that came directly from its ruler, King Hartapu. One part of the stone read, "The storm gods delivered the [opposing] kings to his majesty."

The lost kingdom likely existed between the ninth and seventh centuries B.C. and at its height, it likely covered around 300 acres (120 hectares). Though that sounds tiny compared with modern cities, it was actually one of the largest settlements to exist in ancient Turkey at the time.

The name of the kingdom is unclear, but its capital city was likely located at what is now the nearby archeological site of Turkmen-Karahoyuk. The Konya Regional Archaeological Survey Project had identified this settlement as a major archeological site in 2017, and Osborne and his colleagues had been excavating there at the time when the stone was discovered.

This inscription isn't the first mention of King Hartapu. Just under 10 miles (16 kilometers) south, archeologists previously discovered hieroglyphic inscriptions on a volcano that referred to King Hartapu. That inscription didn't reveal who he was or what kingdom he ruled, according to the statement.