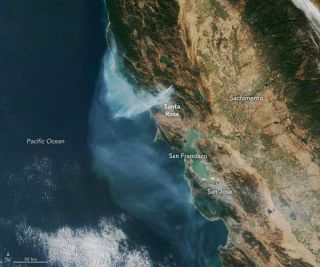 More than 76,000 acres (308 kilometers) had burned in the Kincade Fire as of Oct. 29, 2019. The wildfire is scorching Sonoma County in California.
(Image: © NASA Earth Observatory)

Smoke from Northern California's Kincade Fire is visible drifting out toward the sea in a new satellite image.

The shot was taken in the afternoon of Oct. 29 by the Visible Infrared Imaging Radiometer Suite (VIIRS) on the Suomi NPP satellite and released by NASA's Earth Observatory.

The Kincade Fire has been burning since Wednesday, Oct. 23, and had burned through 76,825 acres (31,090 hectares) in Sonoma County as of Thursday (Oct. 31), according to Cal Fire, the California Department of Forestry and Fire Protection. Though no one has died in the fire, four firefighters have been injured fighting the flames and 282 structures have been destroyed. More than 200,000 people were evacuated from the path of the fire in the past seven days.

Hot, dry weather and gusting winds have ignited a series of frightening fires in California this month, also prompting the state's power utility, PG&E, to cut power to hundreds of thousands of customers in an attempt to prevent downed lines from sparking new fires. Gusts of 100 mph (160 km/h) were recorded near Lake Tahoe over the weekend, reported The Sacramento Bee. Meanwhile, in Southern California, the Santa Ana winds fueled fires such as the Easy Fire, which had burned 1,491 acres (600 hectares) in Simi Valley, near Los Angeles. That fire threatened to burn the Ronald Reagan Presidential Library on Tuesday (Oct. 30), but firefighters contained the encroaching flames.

The Santa Ana winds are seasonal gusts that blow downslope from California's interior toward the coast. They regularly blow in the autumn, when the California coast is coming off its dry season, creating prime conditions for wildfires. Also in Los Angeles, the Getty Fire, first reported Monday (Oct. 28), has burned 745 acres (300 hectares) near Interstate 405, destroying at least a dozen homes. According to city officials, the fire sparked when strong winds blew a branch into a power line.

The Kincade Fire hit in wine country, during the harvest season. According to The Mercury News in San Jose, one winery was destroyed (Healdsburg's Soda Rock Winery) and four more were damaged. By the morning of the 31st, the fire was 60% contained.