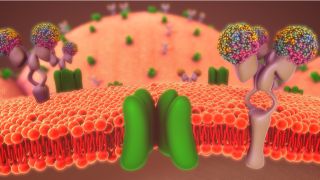 After nearly 150 years, we may finally understand how general anesthesia makes us drift into unconsciousness — although some of the specifics remain murky.

These drugs dislodge molecules held in the fatty membrane that surrounds brain cells. Once the drugs reach this fatty shell, the freed molecules bounce around like billiard balls within the membrane and alter the function of proteins embedded in its surface, according to a new study in cultured cells and fruit flies.

The new findings could help resolve a mystery that has lingered for decades.

"People have been seriously hammering on this for at least 100 years," said study author Scott Hansen, an associate professor in the departments of molecular medicine and neuroscience at The Scripps Research Institute in La Jolla, California.

But not everyone thinks the new study can reveal why anesthetics put humans "to sleep."

"Let's just say there's a large difference between the fruit fly brain and the human brain," said Dr. Emery Brown, a professor of Medical Engineering and Computational Neuroscience at the Massachusetts Institute of Technology and a professor of Anaesthesia at Harvard Medical School, who was not involved in the study.

Since dental surgeon Dr. William Morton first used the chemical ether as an anesthetic in the 1840s, scientists have sought to understand how the drug and other anesthetics interact with the brain. Nineteenth-century scientists suspected that anesthetics somehow disrupted the fatty membrane surrounding cells, including brain cells, as the drugs repel water while readily mixing with oils and fats, he said. Later research, conducted in the 1980s, suggested that anesthetics bind directly to proteins lodged inside the fatty membrane and directly interfere with the activity of said proteins, driving down the overall activity of brain cells, The Scientist reported. But Hansen and his colleagues suspected this wasn't the whole story.

In experiments in cultured cells and fruit flies, the authors found that anesthetics disrupt specific pockets of fat within the cellular membrane; those disruptions then free molecules and trigger chain reactions elsewhere on the cell surface. The authors posit that these molecular changes, among other mechanisms, caused fruit flies to lose consciousness, as evidenced by the insects becoming immobile for several minutes.

However, experts told Live Science that these animal experiments can only tell us so much about how the drugs work in humans.

While the study reconfirms that anesthetics are "dirty drugs," meaning they target multiple cellular systems at once, it cannot say exactly how disruptions to the fatty membrane alter consciousness, or even how those changes alter activity throughout the brain, Brown told Live Science.

The drugs disrupt the membrane, "okay, but now finish the story," he said. "How does that then drive [activity in] certain parts of the brain?" Understanding how anesthetics work could help doctors use the drugs more precisely in the clinic, Brown said.

This understanding might also hint at how the brain naturally shifts in and out of consciousness, as it does during sleep, Hansen added.

"Back in the day," when anesthetics first entered widespread use, scientists theorized that many of the physiological effects of drugs stemmed from changes to the fatty membrane of cells, a gateway that determines when molecules may enter or exit, said Francisco Flores, a research scientist and instructor in the Anesthesia Department at Massachusetts General Hospital who was not involved in the study. As technology progressed, scientists discovered that many drugs interact with specific proteins anchored in the fatty membrane, and subsequently, research efforts focused more on these membrane-bound proteins than the fats surrounding them,  known as lipids, he said.

"However, for anesthetics, the lipid hypothesis survived for longer," Flores said. Anesthetics can cross the blood-brain barrier, a border of cells that separates circulating blood from  brain tissue and allows only certain molecules to pass through. All anesthetics, as well as other drugs that pass the blood-brain barrier, repel water and readily interact with lipids, "so there's still a chance that they can do something in the membrane," he said.

But nineteenth-century scientists could not observe how anesthetics warped the lipid membrane; the task required super‐resolution microscopes that had not been invented at the time, Hansen said. Hansen and his co-authors used such a microscope, called dSTORM, to observe how cells reacted when bathed in the anesthetics chloroform and isoflurane.

Related: 10 facts every parent should know about their teen's brain

They found that different types of fats within the cell membrane reacted differently to the drugs.

One pocket of fats, known as GM1, contains high concentrations of cholesterol molecules, tightly packed together and dotted with specific sugar molecules. Upon exposure to anesthetic, the fats within these GM1 clusters spread out, and in doing so, release various proteins that were enmeshed with them. One such protein, called PLD2, escapes to a different bundle of fats and initiates a series of chemical reactions.

Specifically, the reaction opens a tunnel through the cell called a TREK1 ion channel, which allows positively charged particles to exit the cell. In a brain cell, this mass exodus of positive particles makes the cell more negatively charged and could suppress that cell's electrical and chemical activity. That, theoretically, could push the brain into an unconscious state, Hansen said.

But it may not be that straightforward, Brown noted.

To see if their cell experiments carried over to animals, the authors dissected the brains of fruit flies and found that, after exposure to chloroform, fats within the lipid membranes of  the flies' brain cells spread out just as had been observed in cell culture. In addition, mutant fruit flies without the ability to make PLD2 became resistant to the chloroform treatment and required a larger dose to become sedated, researchers reported in the study, which was published May 28 in the journal Proceedings of the National Academy of Sciences.

Because the mutant flies were not completely immune to chloroform, the authors concluded that multiple mechanisms likely allow the drug's anesthetic effect to take hold. Disruptions to cells' lipid membrane may contribute to this overall effect, but at this point, their relative influence remains unclear, Brown noted. "Dirty" anesthetics trigger a number of reactions in the brain through different chemical and metabolic pathways, and scientists don't yet know how membrane disruptions affect the overall activity within that circuitry, he said.

These interactions will be difficult to untangle in the somewhat-simple fly brain, and even more challenging to understand in the human brain, Brown said.

That said, Hansen and his co-authors hypothesize that membrane disruptions may play a broader, unsung role in the effects of anesthetics on humans. Theoretically, anesthetics may indirectly affect many proteins by first disrupting the lipid membrane, Hansen said. Many proteins lodged in the lipid membrane have fatty acids stuck to their structures, for instance, and some of these proteins interact with brain chemicals and help drive activity of brain cells. One hypothesis is that if anesthetics target the fatty acids attached to these proteins, the drugs could conceivably alter their function and sedate the brain, Hansen said.

"Again, this is speculative," and would need to be confirmed with future studies, he added. Similar studies should be done with other drugs that cross the blood-brain barrier, not just anesthetics, to determine whether the effect appears unique or common to many classes of drug, Flores said. Hansen said he wants to see whether  chemicals with similar effects already exist in the brain, and perhaps help put us to sleep.

While the new study opens many interesting avenues for future research, for now, the results remain fairly preliminary, Brown said.

"Do I do something different in the operating room now that I've read that paper? No," Brown said.