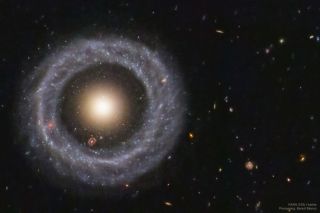 With a perfectly symmetrical ring circling a red sphere of stars, Hoag's object is one of the prettiest mysteries in the universe.
(Image: © NASA/ESA/Hubble)

This cosmic turducken is known as Hoag's object, and it has befuddled stargazers since astronomer Arthur Hoag discovered it in 1950.

The object in question is a rare, ring-shaped galaxy measuring some 100,000 light-years across (slightly larger than the Milky Way) and located 600 million light-years from Earth. In a recent image of the oddball object taken by the Hubble Space Telescope and processed by geophysicist Benoit Blanco, a bright ring of billions of blue stars forms a perfect circle around a much smaller and denser sphere of reddish stars. In the dark gap between the two stellar circles, another ring galaxy — much, much farther away from us — peeks out to say hello.

Related: The 15 Weirdest Galaxies in Our Universe

What's going on here, and what tore Hoag's object in two? Astronomers still aren't sure; ring galaxies account for less than 0.1% of all known galaxies, and so they aren't the easiest objects to study. Hoag himself suggested that the galaxy's peculiar ring formation was merely an optical illusion caused by gravitational lensing (an effect that occurs when extremely high-mass objects bend and magnify light). Later studies with better telescopes disproved this idea.

Another popular hypothesis suggests that Hoag's object was once a more common, disk-shaped galaxy but an ancient collision with a neighboring galaxy ripped a hole through the disk's belly and permanently warped its gravitational pull. If such a collision occurred in the last 3 billion years, then astronomers looking through radio telescopes should have been able to see some of the fallout from the accident. No such evidence has been found.

If there was a cosmic crash at the core of Hoag's object, it must have happened so long ago that all the evidence has been swept away. With only a handful of other known ring galaxies available to study (none of which shows the perfectly symmetrical characteristics found in this one), Hoag's object remains a mystery wrapped in a riddle inside an enigma — you know, like a turducken.