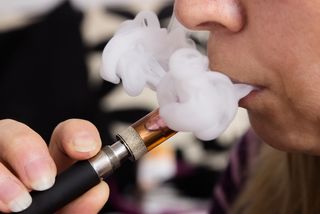 Electronic cigarettes flavored with mint and menthol may contain high levels of a potentially cancer-causing chemical that's banned from food in the U.S., according to a new study.

Pulegone is an oil extracted from mint plants such as peppermint and spearmint that was previously added to candies and chewing gum to give flavor. Last year, the Food and Drug Administration (FDA) banned synthetically made pulegone as a food additive because of carcinogenic effects found in animal studies.

However, there is a "discrepancy in regulation of the chemicals in food versus e-cigarettes," said study co-author Sven Jordt, an associate professor in anesthesiology, pharmacology and pathobiology at Duke University's School of Medicine. For e-cigarettes, the FDA's "level of regulation is fairly minimal."

For the new study, the researchers analyzed how much risk came with inhaling or ingesting pulegone. They calculated what's called the "margin of exposure" — a measure used by the FDA to calculate the cancer risk posed by food additives —  for people who smoked various levels of flavored e-cigarettes and used smokeless tobacco.

The FDA deems a product safe for consumption if its margin of exposure (which is expressed as a ratio) is 10,000 or above. In other words, they say a food additive is safe when its concentration in food is 10,000 times lower than what would cause cancer in animals such as rats.

The researchers calculated the margin of exposure for five different brands of menthol- and mint-flavored e-cigarettes and one brand of smokeless tobacco. They then compared the levels to that of menthol cigarettes.

In the results, the margin of exposure for people smoking or consuming smokeless tobacco that contains pulegone ranged from 325 (in the heavy users) to 6,012 (in the light users) — much higher than the safety margin. What's more, people who smoked flavored e-cigarettes or consumed smokeless tobacco were exposed to much higher levels of pulegone than those who smoked menthol cigarettes, which have largely reduced levels of pulogene compared to what they contained in the 1970s, Jordt said.

"Levels by far exceeded [the] amount FDA was considering safe," Jordt said. "Users may eventually develop cancer based on the risk we found." That would, of course, not happen immediately, but over the course of many years. Now, Jordt and his team are exposing human lung cells in a lab dish to pulegone to see if the compound damages the cells. "We are also approaching the CDC and FDA about this data," he said.

The findings were published today (Sept. 16) in the journal JAMA Internal Medicine.