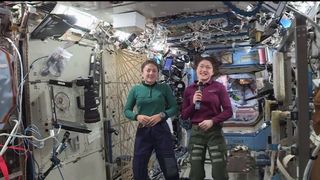 NASA astronauts Jessica Meir (left) and Christina Koch are scheduled to take a spacewalk together on Oct. 21, 2019.
(Image: © NASA TV)

NASA is gearing up for a marathon of spacewalks, and one of them could be the first spacewalk to be conducted entirely by women.

Although astronauts and cosmonauts have completed more than 200 spacewalks for the construction and maintenance of the International Space Station, only 15 women have ever been on a spacewalk, and they have always been accompanied by men. NASA had originally planned to have the first all-female spacewalk in March, but that plan fell apart due to a lack of properly fitted spacesuits.

Related: The Most Memorable Spacewalks in History (Gallery)

For the spacewalk in March, Koch was slated to head out with her fellow astronaut Anne McClain. Both women needed a size-medium hard upper torso (HUT), the part of the spacesuit shaped like a T-shirt. However, only one was readily available at the space station. McClain had originally planned to wear a size large but decided that the medium fit her better. While there was spare size-medium HUT on board, building McClain another suit would have taken too long, so one of her size-large crewmates did that spacewalk in her stead.

Meir also requires a medium HUT for her spacesuit, but that won't be a problem this time around, because NASA has had plenty of time to prep another medium suit since March. That spare size-medium HUT launched to the space station last year, but that wasn't necessarily  part of a plan to have the first all-female spacewalk. In a news briefing today (Oct. 4), NASA's ISS Program Manager Kirk Shireman said that the agency plans to launch "a lot of medium-suit people" to the space station over the next couple of years, so that HUT will be put to good use.

For the first five of the 10 spacewalks coming up, the Expedition 61 astronauts will be swapping out old batteries on the station's solar panels, work that has been ongoing in a series of spacewalks that began in 2017.  The next five spacewalks will focus on repairs to the space station's Alpha Magnetic Spectrometer, an ailing dark matter experiment. Each of those spacewalks is expected to last about 6.5 hours.

The first spacewalk is coming up on Sunday (Oct. 6), when NASA astronaut Drew Morgan and Koch will work together to install new batteries on the P6 truss. You can watch all of these spacewalks live here at Space.com, courtesy of NASA TV.