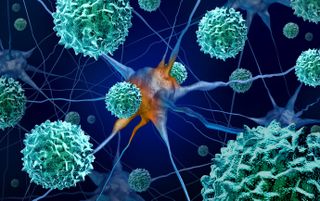 A mysterious polio-like illness that spiked in 2014, leading to paralysis in children across the U.S., may have divulged one of its secrets. Researchers have now found the most direct evidence to date of a viral culprit — the remnants of the immune cells that responded to the virus in the spinal fluid of patients.

Acute flaccid myelitis, or AFM, is a rare disease of the nervous system that mostly develops in children. Symptoms include loss of muscle tone and weakness in the arms and legs, decreased reflexes and, in the most extreme cases, paralysis. This year, there have been 22 confirmed cases of AFM in the U.S.; 236 AFM cases in 41 states were confirmed in 2018, according to the Centers for Disease Control and Prevention. Since 2014, the CDC has confirmed 590 cases.

The cause of AFM has long been debated, but increasing evidence points to some kind of enterovirus —  a group of common viruses that typically invade the gastrointestinal tract and cause mild symptoms but can sometimes make their way to the central nervous system, causing more serious complications.

Still, almost all patients who have their spinal fluid tested do not test positive for an enterovirus.

"People were hung up on the fact that enteroviruses were rarely detected in the cerebrospinal fluid of AFM patients," senior author Dr. Michael Wilson, an associate professor of neurology at the University of California, San Francisco, said in a statement. "They wanted to know how someone could get neurologic symptoms with no virus detectable in their central nervous system."

Perhaps the virus was no longer active in the body when those patients developed signs of AFM, said Dr. Amesh Adalja, an infectious disease specialist and a senior scholar at the Johns Hopkins Center for Health Security in Baltimore, who wasn't involved with the study. "The fluids have to be taken at a time when [the] virus is actually present."

As in other studies of AFM, Wilson and his team directly tested the spinal fluids of AFM patients, again finding no signs of an enterovirus.

So, they decided to take a different approach. The researchers used a technology called VirScan to analyze the spinal fluid of patients – not for the virus, but for signs of an immune response that could have been triggered by a virus. The team created viruses bound to nearly 500,000 small compounds called peptides found on over 3,000 different viruses known to affect organisms ranging from ticks to humans.

The scientists then exposed these proteins to spinal fluid that they had obtained from 42 children with AFM and 58 people with other neurological diseases. If the spinal fluid contained antibodies  that bound to one of these proteins, it likely meant that the immune system previously created that antibody to fight the virus that contained that protein.

"The strength of this study is not just what was found, but also what was not found," co-author Dr. Joe DeRisi, a professor of biochemistry and biophysics at UCSF, said in the statement. "Enterovirus antibodies were the only ones enriched in AFM patients."

This study "confirms what people have been thinking about for some time," Adalja said. "We are "getting closer and closer to proving causation for enteroviruses as the infectious agents that are responsible for AFM."

Still, it's not a cause-and-effect finding, and there are many questions that remain, such as what particular strains of the viruses might be causing the disease and if there might be more than one cause of AFM, Adalja said. "This will hopefully spur research not only to fill in the missing pieces of this puzzle but also to think about — Should we be vaccinating against other enteroviruses," just like we vaccinate against the enterovirus that causes polio, he added.

The study was published today (Oct. 21) in the journal Nature Medicine.