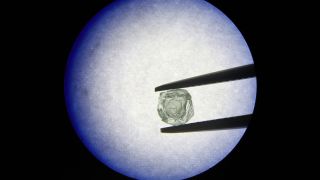 Inside this small diamond is a freely moving second diamond.
(Image: © Alrosa)

It was a gem of a find. A diamond that was recently extracted from a mine in Yakutia, Russia, had a surprise lurking inside: a tiny, second diamond.

The outer diamond measured about 0.2 inches (4.8 millimeters) long, while the wee stowaway spanned about 0.08 inches (2 mm) long and weighed about 0.0001 ounces (0.004 grams). The hidden gem rattled around inside an air pocket at the heart of the larger stone, and Russian experts who examined the peculiar double gem declared it the only known example of a diamond with another diamond inside it, according to a statement.

This unusual diamond-in-a-diamond drew comparisons to a traditional Russian toy called a matryoshka doll, in which successively smaller wooden dolls are nested inside bigger dolls, representatives with the Russian diamond mining company Alrosa told Live Science in an email.

"At first, the crystal did not appear to be any different from other crystals, but when examining it in detail, the sorter noticed movement inside," they said. (Diamonds are composed of carbon atoms arranged in a certain crystalline structure.)

The sorter photographed the crystal and delivered it to Alrosa's Research and Development Geological Division, "which has a laboratory and analytical base that allows the research of diamonds through non-destructive physical methods," according to the email.

Indirect analysis of the nitrogen content in the gem told the scientists that the diamond was about 800 million years old. These precious stones originate as humble graphite — a form of carbon — before the intense pressure deep in Earth's mantle transforms them into diamond crystals.

But for a diamond to naturally form inside another diamond isn't just rare — it's unheard of, said geologist George Harlow, a curator in the Department of Earth and Planetary Sciences at the American Museum of Natural History in New York City.

"I have no knowledge of anything like this in the natural mineral world," he told Live Science in an email. (Harlow was not involved in the analysis of the double diamond).

So, how did this Russian diamond retain an air pocket at its core with another gem inside?

The internal diamond likely grew first, and then the diamond shell took shape around it, according to Alrosa representatives. One possible explanation is that the diamond core grew so quickly that a layer of porous diamond grit — polycrystalline diamond substance, rather than fully formed crystals — coated the diamond core. Another layer of diamond crystals then began to form on top of the polycrystalline grit. But, as the little diamond was squeezed and heated in Earth's roiling mantle, the gritty layer dissolved and left behind a diamond nugget inside a diamond shell.

There was enough space left around the smaller diamond that it was able to move freely inside the bigger one, "like a matryoshka nesting doll," Alrosa representatives said in the email.

Diamonds fascinate humanity with their beauty, but some notable examples, though beautiful, are thought to be cursed. Among the most famous of these allegedly cursed jewels is the Hope Diamond, which had a long history of owners plagued by lost fortunes, personal tragedy, insanity and violent deaths.

These spectacular gems also hold intriguing secrets about our planet. A diamond that was recently discovered in South Africa held a mineral that was previously unknown to science. Some diamonds contain traces of salt from ancient oceans. And tiny mineral flaws in diamonds can reveal snapshots of Earth's continents as they took shape 2.5 billion years ago, Live Science previously reported.

Perhaps there’s another story to be told by this newfound gem-inside-a-gem.