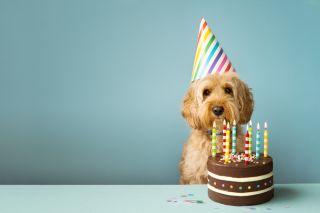 When your dog's big, pleading eyes look up at you, is it with old-age wisdom or teenage naiveté? Researchers came up with a new equation to calculate your dog's age in human years.

And the math isn't as simple as multiplying Fido's age by 7, a myth that has already been debunked. The new equation is based on chemical changes to a dog's DNA. "Mammals progress through similar physiological stages during life, from early development to puberty, aging and death," a group of researchers wrote in a new study that hasn't yet been published in a peer-reviewed journal.

But it's unclear if dogs, humans and other mammals also go through the same molecular changes in the body at a similar rate. So the researchers in the new study looked at DNA methylation, the attachment of a group of three hydrogens and one carbon (a methyl group) onto parts of a DNA molecule, which can serve as a sign of aging.

Related: 4 Ways Owning a Dog Can Make You Healthier

In humans, the rate of DNA methylation tends to increase with age and serves as an "epigenetic clock" or a way to predict a person's age; scientists have previously been able to tell the age of a blood donor by looking at the amount of methylation in their DNA. Similarly, researchers have found that other species, including dogs, also undergo DNA methylation.

In this new study, the group analyzed the DNA, including its methylation, in blood samples taken from around 100 dogs, mostly Labrador retrievers, from a little over a month old to 16 years old. The researchers compared their results with previously published "methylation profiles" of 320 people from ages 1 and 103.

Results showed that the methylation progressed roughly the same way in dogs as in humans; the amount of methylation in young dogs resembled that in young humans, and the amount in old dogs was similar to that in old humans.

The researchers found that 8 weeks in dogs corresponded to 9 months in humans, when both species start growing tiny teeth. The average life span of the retrievers, 12 years, corresponded with the worldwide lifetime expectancy of humans, which is 70 years. But for adolescent and mature dogs, the relationship was "more approximate," the researchers wrote. Adolescent and mature dogs aged a bit faster compared to adolescent and adult humans (i.e., undergo more methylation). But when the dogs neared the end of their lifespan, aging or methylation rates lined up again with that of older humans.

So, the researchers came up with an equation to describe this relationship: 16 x ln(dog age) +31. In other words, take the natural log of the dog's age, multiple by 16 and then add 31.

Of course, this was calculated based on a single breed, and other breeds have different rates of aging, the authors wrote. More studies analyzing methylation are needed to figure out lifespan for different breeds — and different animals, they wrote.

The researchers reported their findings Tuesday (Nov. 19) in the preprint journal bioRxiv.