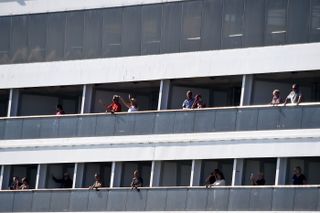 Two cruise ships carrying coronavirus-exposed passengers that have been in limbo off the coast of Florida are being allowed to dock after a Coast Guard order yesterday warning ships' doctors to prepare to treat individuals who have tested positive for COVID-19, the disease caused by the novel coronavirus, at sea indefinitely.

The initial refusal to let the ships dock was "unprecedented," said Dr. Phil Brewer, the university medical director for Student Health Services at Quinnipiac University in Connecticut and a former cruise ship doctor. Brewer served as a physician aboard more than 50 cruises between 1996 and 2015. He told Live Science that no cruise ship is set up to care for severely ill patients long term.

"If they were really severely ill, I would say the most you could take care of is two or three people," Brewer said. Typically, there is only one ventilator aboard a cruise ship, he said, and perhaps only five hospital beds for patients, assuming exam rooms and rooms used to quarantine sick crew members could be hastily converted.

There are dozens of cruise ships awaiting entry into Florida, most with only crew aboard, according to the Associated Press. But there are also more than 6,000 passengers still at sea, Carnival Corp. reported to the Securities and Exchange Commission on Tuesday (March 31).

Among them are the passengers of the Zaandam and the Rotterdam, two ships in Carnival's Holland America line. Four people have died on the Zaandam, two of COVID-19, according to the AP. Nine people have tested positive for the coronavirus aboard the ship, and more than 200 additional people have reported respiratory symptoms. The ship had last docked in Chile on March 14, according to CNN. Passengers were not allowed to disembark for flights in Chile. Nor were they allowed to dock in Panama, where the ship lingered several days until Sunday (March 29) in hopes of being allowed to let passengers disembark. The Rotterdam was sent to meet the Zaandam near Panama in order to deliver supplies, staff and COVID-19 test kits, and to take on healthy passengers from the Zaandam.

Florida Gov. Ron DeSantis was initially reluctant to allow the ships, which carry hundreds of U.S. citizens, to dock in the state, citing a lack of medical facilities.

"My concern is simply that we have worked too hard to make sure we have adequate hospital beds," DeSantis said, according to the AP.

But today (April 2), local authorities and Holland America announced that they had come to an agreement to allow the ships to dock in Florida's Port of Everglades. Fewer than 10 people aboard were in need of critical care, according to the cruise line, and they would be taken to a local hospital. Healthy patients will be taken directly to airports to return home, according to CNN, and Broward County residents on the ships will self-isolate at home for 14 days.

The two ships are not the last that will need to find hospitable ports. The Coral Princess, also a Holland America ship, will arrive in Fort Lauderdale, Florida, on April 4, according to Fox News. There are more than 1,800 people aboard, and 12 have been confirmed to have COVID-19.

"None of them involve long-term management of medical issues," he said.

If the number of patients requiring ventilation exceeded the number of ventilators aboard, he said, staff would have to stand over the extra patients with Ambu bags, continuously squeezing air into their lungs.

The coronavirus pandemic will likely change the way the cruise industry plans for illness outbreaks, Brewer said. Previously, the infectious disease that kept cruise lines awake at night was norovirus, the rapid-onset diarrhea-and-vomiting bug. But norovirus is transmitted through fecal and vomit particles in food and water; the particles can also get transferred from someone's hands into their mouths. Coronavirus can also be transmitted via the hand-to-mouth route, but the main route of transmission is via respiratory droplets inhaled into the throat and lungs.

"This is a different bug and it is more contagious and also much more serious," Brewer said.

Major cruise lines have shut down new cruises until at least mid-May. On April 2, CNN published a list of the status of all known cruise ships that are still at sea. While most are not known to have people infected with the coronavirus on board, there are at least nine carrying passengers and at least nine carrying only crew.