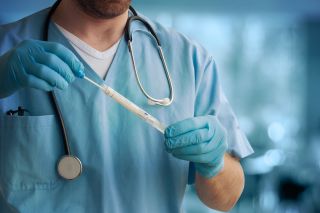 More people in the United States are seeking medical care for symptoms of fever, cough and sore throat, but they are testing negative for flu. That could suggest that the spread of the new coronavirus is picking up steam in the U.S., Bloomberg.com reported.

The U.S. Centers for Disease Control and Prevention operates a national surveillance network that tracks doctor's visits for influenza-like illnesses (ILIs), or those that include a fever over 100 degrees Fahrenheit (37.8 degrees Celsius), in addition to a cough or sore throat. Many states collect similar data.

Those networks are reporting an increased number of ILIs in people who test negative for influenza. However, it's not yet clear whether that increase is due to the spread of coronavirus, according to Bloomberg. In fact, it could be that more people are coming to their doctors with minor symptoms because they are concerned about COVID-19, the disease caused by the new virus.

Related: Coronavirus in the U.S.: maps, case counts and news

However, a few signs suggest that COVID-19 could be behind at least some of these regional spikes. For instance, the uptick is noticeable in the Pacific Northwest, and Washington has reported the most cases of any state in the country, with 642 cases and 40 deaths as of Saturday afternoon (March 14.) In the week that ended March 7, 6.8% of Washington residents visited their doctors with flu-like symptoms, compared with 4% the prior week. Emergency room visits showed a similar trend. Like Washington, New York logged a slightly smaller increase in these doctors' visits, with a similar decline in positive flu cases.

"There may be enough community transmission in some states to show up," Caitlin Rivers, a professor at Johns Hopkins Center for Health Security who helped lead the analysis, told Bloomberg News.

However, it's difficult to interpret these slight changes. For one, flu tests can miss cases. And numbers can jump around from week to week. What's more, flu season often begins to wane around this time of year, Dr. William Morice II, chair of laboratory medicine and president of Mayo Clinic Laboratories, told Bloomberg News, so it may not be surprising that fewer cases of fever and cough are associated with influenza.