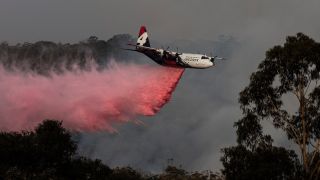 A large air tanker (LAT) drops retardant near a property on January 10, 2020 in Penrose, Australia. The country is facing a megafire in the state of New South Wales that spans 2,300 square miles (6,000 square kilometers).
(Image: © Brook Mitchell/Getty)

The merged fire is only one of at least 155 burning in New South Wales, according to The Sydney Morning Herald, and parts of the blaze extend into the neighboring state of Victoria. Strong winds are forecast for Saturday morning in the area, and those gusts could complicate firefighting efforts, the Herald reported.

The megafire formed from the merger of the East Ournie Creek fire and the Dunns Road fire, which came together at the Clarkes Hill Nature Reserve on the border of New South Wales and Victoria.

Related: In Photos: Devastating Look at Raging Wildfires in Australia

"What we're really seeing with a number of these fires merging is a number of small fires started by lightning strikes across the landscape. And as they grow, we see fires merging," New South Wales Rural Fire Service spokesperson Anthony Clark told the Herald.

The fire service issued an emergency alert for the megafire on Friday night (Jan. 10) local time, meaning that the fire was an immediate threat to life and property. In the early morning hours on Saturday, the alert was downgraded to "watch and act," indicating a still-high threat level.

This is not the first megafire that Australia has faced this fire season. In October, a lightning strike sparked the Gospers Mountain megafire in Wollemi National Park north of Sydney. The fire is under control, but it is still burning and has destroyed 1,977 square miles (5,120 square km).

Twenty-five people have died in this season's wildfires in Australia, according to NPR. An ecologist at the University of Sydney estimated that in New South Wales alone, at least half a billion wild animals have died in the fires since September.

The country's fire season usually peaks in January, according to Science News, but blazes started burning intensely and early in 2019. That intensity is driven by record high temperatures, long-term drought, and low moisture levels in the soil and air, climate scientists told Science News. This pattern is partly driven by variations in El Niño oscillations. These variations are likely to become more common as the climate warms, climate scientists reported in the journal Nature in 2014.