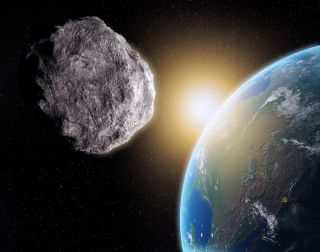 An artistic depiction shows a huge asteroid about to slam into Earth.
(Image: © Shutterstock)

A monster of an asteroid that nearly rivals the height of the Burj Khalifa — the world's tallest building, located in Dubai — is cruising by Earth in less than a month, according to NASA.

This asteroid is so immense, it's nearly twice the height of the 1,250-foot-tall (381 m) Empire State building. It's expected to whiz by our blue planet on Sept. 14, according to the Center for Near Earth Object Studies (CNEOS), a part of the Jet Propulsion Laboratory in Pasadena, California.

However, asteroid 2000 QW7 isn't exactly in a position to drop in for tea. First off, it will be going incredibly fast — 14,361 mph (23,100 km/h) — as it zooms by Earth, CNEOS reported. Second, even though it's considered a near-Earth object, it will still be quite far away. Asteroids and other space materials are considered near-Earth objects if they pass within 1.3 astronomical units of our planet (an astronomical unit is the distance from Earth to the sun, or 92.9 million miles (149.6 million kilometers)).

Just like Earth, asteroid 2000 QW7 orbits the sun. However, it only sporadically crosses paths with Earth. The last time it approached our planet was Sept. 1, 2000. After Sept. 14, the next time it's expected to pass by is Oct. 19, 2038, according to the Jet Propulsion Laboratory.

Editor's Note: This story was corrected to note that the Burj Khalifa is in Dubai, not Abu Dhabi.