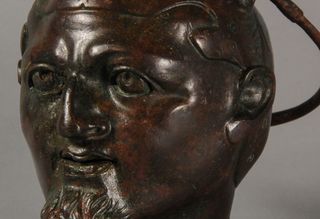 Dating back about 1,800 years, the brass balsamarium shows the head of a man wearing a cap made from the skin of a feline.
(Image: © Daniela Agre)

The skeleton of an ancient sports fan was discovered alongside an 1,800-year-old jar shaped like the head of a wrestler or boxer who may have had his nose broken, archaeologists reported.

The "spectacular" balsamarium — a jar used to store liquids such as balm or perfumes — was found in a grave in southeastern Bulgaria (ancient Thrace).

It dates to a time when the Roman Empire controlled Thrace — an ancient area that encompassed parts of Bulgaria, Greece and Turkey.

Made of brass, the balsamarium depicts a man with a goatee and a nose that looks crooked or bent as if it had been broken and not fully healed. The man is wearing a cap made from the skin of a feline, likely a panther or leopard, the archaeologists wrote in a paper published in the October issue of the American Journal of Archaeology.

Examples of balsamariums that have similar features, such as a crooked or bent nose, have been found elsewhere in the Roman Empire and are often interpreted as depicting boxers or wrestlers.

The feline cap worn by the man may be an allusion to a Nemean lion, a creature that the Greek god Hercules fought and defeated, according to ancient mythology.

"It is probable that the representation of the athlete's cap as the skin of a savage feline was meant to suggest the athlete's similarity to Hercules and, in this way, to signify the heroic power and courage possessed by the athlete," the archaeologists wrote in their paper.

The skeleton that was also found in the grave belonged to a man who died when he was about 35 to 40 years old. Also buried with the remains, the team found a blade used to scrape sweat and dirt from the skin.

"In our opinion, the grave belongs to a Thracian aristocrat, who has practiced sport in his everyday life, rather than to a professional athlete," Daniela Agre, an archaeologist at the National Archaeological Institute with Museum at the Bulgarian Academy of Sciences, who led archaeological work at the site, told Live Science.

The man's grave is part of a larger burial complex that was found within a 9.8-foot-high (3 meters) burial mound called a tumulus.

"We think that the tumulus was used as a family necropolis and the deceased was a part of this family," Agre said. Excavations were carried out at the tumulus in 2015.