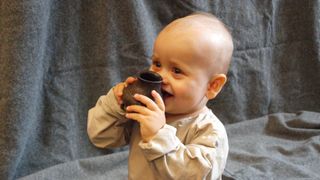 Babies and young children drank from clay "sippy cups" during the Bronze Age and the Iron Age, and the practice may have existed as early as 7,000 years ago, a new study reveals.

These spouted artifacts have been found at archaeological sites across Europe, first appearing in the Neolithic period and becoming more common, according to the study. Scientists suspected that the vessels were meant for feeding babies and toddlers, but some researchers argued that the pottery may have been meant for adults who were sick, injured or elderly.

To settle that question, the study authors analyzed vessels from children's graves in what is now Germany to identify what they once held. The researchers found residue of animal milk fats, suggesting that the vessels held milk that was fed to young children to supplement breastfeeding or to help with weaning.

This is the first "direct evidence of the foods these babies were fed," said lead study author Julie Dunne, a senior research associate with the University of Bristol's School of Chemistry, in the United Kingdom.

Related: Back to the Stone Age: 17 Key Milestones in Paleolithic Life

The researchers examined three vessels from the graves of very young children; the eldest was no more than 6 years old, according to the study. Two of the graves were in a cemetery dating from 800 B.C. to 450 B.C. , and one grave — a cremation burial — was found in a necropolis dating from 1200 B.C. to 800 B.C..

Archaeologists typically look for ancient organic residues by grinding up small pieces of broken pottery — there are often thousands at any given site — and then chemically analyzing the powder, Dunne told Live Science.

"Based on various molecular and isotopic information, we can tell what kind of products were in the vessel: animal products — meat or milk — plants or beeswax, which would denote honey," she said.

However, testing small, whole objects without damaging them is a lot trickier, Dunne added. For the study, the scientists carefully swabbed the insides of the vessels, collecting grains of loose powder. Fatty acids in the residue from the younger vessels hinted that their milk came from ruminants — animals that chew their cud, such as cows, sheep or goats. The older cup held milk that came from nonruminants, perhaps human or pig milk, the study authors reported.

But could a child have comfortably used one of those cups? To find out, the researchers reconstructed one of the vessels in the study, filled it with diluted applesauce and handed it to an eager 1-year-old.

"He cupped it in his hands and started suckling from it — and he loved it," Dunne told Live Science. "There's something intuitive for a baby about the shape; they all have the same basic shape that you'd hold in between your hands."

If these cups from the Bronze Age and Iron Age were used to feed babies, it's likely that the same is true for similar cups found at other sites that date to the Neolithic, according to the study.

These cups offer an intriguing glimpse of an important shift in human history. As people transitioned from hunter-gatherer lifestyles to more agrarian habits, they gained reliable access to milk and cereals to feed their babies, which meant families could grow more quickly, Dunne said.

"Hunter-gatherers tend to have gaps of about five years between babies," she noted. "But once people start living an agricultural lifestyle, the inter-birth interval becomes much shorter, more like two years.

"People have more babies because it's easier to feed them," Dunne added. "Eventually, this leads to people living in larger settlements — and eventually to urbanization."

The findings were published online Sept. 25 in the journal Nature.