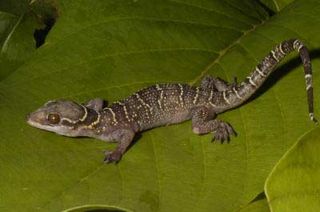 The West African forest gecko, Hemidactylus fasciatus, is secretive but common in the tropical rain forest patches stretching nearly 3,000 miles (4,800 kilometers) from the coast of Sierra Leone to the Congo. Two post-docs -- former UC Berkeley students -- have now determined that the gecko is at least four distinct species scattered through isolated patches of forest across West Africa.
(Image: © Charles Linkem)

A secretive gecko that hides out in forest patches in West Africa is actually four distinct species, which evolved over the past 100,000 years due to fragmentation of their tropical rain forest homes, a new study suggests.

The West African forest gecko, which is about 6 inches long (15 centimeters), lives in rain forest patches from Ghana to Congo.

"We tended to find this gecko, Hemidactylus fasciatus, throughout our travels in West Africa," said Adam Leaché, a herpetologist with UC Berkeley's Museum of Vertebrate Zoology. "Despite the fact that it is recognized as one species, using new methods we have established a high probability that it is composed of at least four species."

The fragmentation of forests in West Africa is partly due to a long-term drying trend there. But human activity is leading to more forest loss and a resultant impact on geckos.

"These rain forests are classified as one of the biodiversity hotspots on the planet, yet they are one of the most endangered areas on the Earth," Leaché said. "Human deforestation is accentuating the process of habitat destruction."

Leaché and Matthew K. Fujita, a post-doctoral fellow at Harvard University's Museum of Comparative Zoology, collected numerous specimens of the forest gecko within the rain forest belt, which stretches nearly 3,000 miles (4,828 kilometers) from the coast of Sierra Leone through the Guinean rain forest in Ghana, through Nigeria and Cameroon, to Congo's rain forest. Over millions of years, this forest has expanded and shrunk with climate change, and a drying trend over the past several hundred thousand years has caused the forest to contract to mountainous areas, Leaché said.

Leaché and Fujita found sufficient genetic differences among the 50 geckos collected from 10 different forest patches to identify four distinct species. The different species were found in different forest patches, suggesting that the species divergence was driven by the isolation of gecko populations from one another after gaps developed in the rain forest.

Not all of the species were separated by forest gaps, however. The wide Sanaga River in Cameroon formed the dividing line between two species, which the researchers named Hemidactylus coalescens and Hemidactylus eniangii.

They retained the name Hemidactylus fasciatus for the westernmost species, but identified an isolated species, Hemidactylus kyaboboensis, in the so-called Togo Hills.

To delineate the four species, the researchers used a statistical technique called Bayesian species delimitation, which gives the odds that researchers are correct when naming a new species.

"This method gives you a probability associated with the number of species identified, something we haven't been able to do in speciation research until now," Leaché said. "Before, it was more of a qualitative assessment. Here, we get a quantitative assessment, which is reassuring."

As a result, the researchers can say with high probability (essentially 100 percent) that the gecko specimens belong to four species.