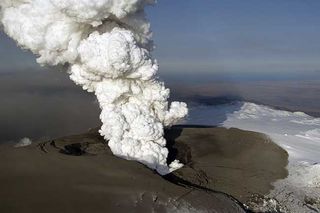 As the ash plume from the Icelandic volcano fades a bit, and travelers begin to resume life as normal, glaciovolcanologists are waiting anxiously with rock and ice chisels in hand. These scientists who study glaciovolcanoes — ice-covered volcanoes such as Eyjafjallajökull — are interested in the eruption's aftermath.

So they have to wait for the icy volcano to stop erupting before they can begin their work.

Learning more about the volcano-ice interactions will allow researchers to better understand active and dormant glaciovolcanoes. Other examples of glaciovolcanoes include: Katla, Hekla and Askja on Iceland; Edziza in British Columbia, Canada; and Mount Rainier in Washington and Alaska's Mount Redoubt. Such knowledge might help emergency planners better prepare for the next eruption.

"We need more studies of present and old eruptions to be prepared to respond to a volcano-ice crisis in North America--or elsewhere around the globe," said Sonia Esperanca, program director in the National Science Foundation's Division of Earth Sciences, which funds research on glaciovolcanoes.

"When an ice-covered volcano erupts, the interplay among molten magma, ice and meltwater can have catastrophic results," Esperanca said.

When hot lava melts ice quickly, the resulting water can mix with magma, flash to form steam, and produce powerful explosions of fine volcanic ash, according to Ben Edwards, a researcher at Dickinson College, Pennsylvania, who studies these types of volcanoes.

The eruptions can also trigger floods as the ice covering melts, as happened last week in Iceland.

What's left behind after an eruption can serve as a window into our geologic past, the researchers say.

Edwards and his colleague Ian Skilling, of the University of Pittsburgh, are working at Mt. Edziza in British Columbia, Canada, and in Iceland to find out how glaciovolcanic deposits — rock fragments strewn for miles after an ice-covered volcano erupts — are formed.

Studying these deposits helps scientists get a better handle on Earth's long-term climate cycles. The volcanic shards are "proxies" for climates of the past.

A key to using these rocks as proxies is the ability to correctly interpret fragmentation of lava and other textural and chemical features. From these, scientists estimate the thickness of snow and ice before and during a glaciovolcano's eruption. The quantity of ash and flowing lava changes as the eruption progresses until there's no more magma to erupt.

Glaciovolcanic deposits are identifiable long after an eruption ends. Pillow lava, for example, which usually forms on the ocean floor, is sometimes found high atop mountains in British Columbia and Iceland, and in the Antarctic.

These round tubes of fossilized lava, coated with shiny black volcanic glass, are indications of volcanoes that once erupted beneath ice or water. By noting the elevation of pillow lavas on mountains or high ridges, geologists can better determine the thickness of surrounding ice.

"Pillow lavas might well be forming right now in the ice-bound caverns on top of Eyjafjallajökull," Edwards said. "By analyzing the gas content dissolved in pillow lavas' glass, we can also estimate the thickness of the overlying ice at the time of their formation."

Edwards and Skilling are still waiting for Eyjafjallajökull to cool before they can uncover its secrets.