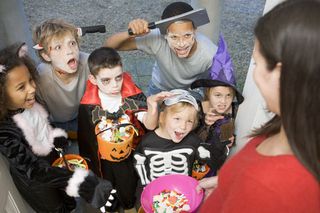 Each year at Halloween, parents have concerns about trick-or-treating, and many believe that a danger far graver than chocolate overdose awaits their children in quiet neighborhoods: sex offenders.

This scare is fueled by alarmist news reports and police warnings. In many states, convicted sex offenders are required not to answer the door if trick-or-treaters come by, or to report to jail overnight. In many states including Texas and Arkansas offenders will be required to report to courthouses on Halloween evening for a mandatory counseling session.

The theory behind such laws is that Halloween provides an opportunity for sex offenders to make contact with children, or to use costumes to conceal their identities. This has been the assumption among many local politicians and police for years. New research also shows that it is simply wrong.

A new study shows that the public has little to fear from sex offenders on Halloween. The research, published in the September issue of Sexual Abuse: A Journal of Research and Treatment, examined 67,307 non-family sex offenses reported to law enforcement in 30 states over nine years.

The researchers wanted to determine whether or not children are in fact at any greater risk for sexual assault around Halloween. The answer was a conclusive no:

"There does not appear to be a need for alarm concerning sexual abuse on these particular days," the researchers state. "Halloween appears to be just another autumn day where rates of sex crimes against children are concerned."

Not only is the hype and fear unwarranted, but the study also suggests extra taxpayer dollars spent monitoring sex offenders on Halloween are wasted. All the mandatory counseling sessions, increased police presence, and so on had no effect at all on the incidence of sexual abuse on Halloween.

That taxpayer dollars are being spent on ineffective and misguided policies regarding sex offenders is not surprising to experts in the field, since the laws target a group that is actually among the least likely to offend against children. Despite popular belief, research has consistently shown that sex offenders are no more likely than other criminals to re-offend. The idea that sex offenders are incurable or require increased vigilance upon release simply has no basis in fact. Children are in far greater danger from their parents than any stranger on a sex offender registry.

These measures provide a false sense of security, since there is no evidence that the policies actually make children any safer. As the study’s authors note, traffic accidents are a far greater threat to children than sex offenders.

Benjamin Radford is managing editor of the Skeptical Inquirer science magazine. He wrote about sex offender myths and Megan's Laws in his book Media Mythmakers. His books, films, and other projects can be found on his website. His Bad Science column appears regularly on LiveScience.