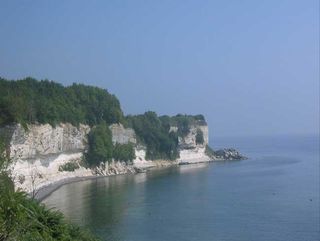 A view of the sea cliff at Stevns Klint, Denmark.
(Image: © R. Summons.)

The asteroid impact that many researchers claim was the cause of the dinosaur die-off was bad news for marine life at the time as well. But new research shows that microalgae – one of the primary producers in the ocean – bounced back from the global extinction in about 100 years or less.

Most of the research on the Cretaceous-Paleogene (K-P) extinction event, previously called the Cretaceous-Tertiary (K-T) event, has involved charting the loss of organisms that had bones or shells.

"But there were many organisms in the ocean that left us no hard fossils," says Julio Sepúlveda of MIT.

Sepúlveda and his colleagues study the molecular remains of microorganisms. They have recently extracted some of these organic residues from rocks dated to the K-P extinction. The results, reported in this week's issue of the journal Science, show that the ocean algae community greatly shrunk in size but only for about a century.

"We found that primary production in this part of the ocean recovered extremely rapidly after the impact," Sepúlveda says.

A full recovery of the ocean ecosystem probably took perhaps a million years or so, but the quick rebound of photosynthesizing algae seems to confirm models that suggest the impact delivered a swift, abrupt blow to the Earth's environment.

The hallmark of the K-P extinction 65 million years ago is the complete disappearance of non-avian dinosaurs. As for the cause, geologic evidence incriminates a meteorite that landed off of the Yucatan peninsula – although some debate continues over just how lethal this impact was.

Debris from the impact would have darkened the sky for several years, shutting down photosynthesis across the planet. But just how long plants and algae were deprived of sunlight has been hard to say. The fossil record is not very clear on this issue, which is why some scientists are looking for other biological clues.

"We study the 'invisible life' – the microorganisms that don't show up in the fossil record but who were extremely important in turning over carbon in the ancient ocean," says co-author Roger Summons, also from MIT.

When marine life dies, it falls to the bottom of the sea, where much of its corpse is degraded by bacteria and geochemical processing. But some pieces of biomolecules resist degradation, especially in areas where oxygen levels are low.

This organic detritus can in time accumulate into "fossil fuels," like petroleum and natural gas. In specific cases, researchers are able to extract these molecular leftovers from ancient rock and identify their chemical structure.

"The trick is figuring out what makes what," Summons says.

For example, plant algae make a lot of lipids – specifically sterols like the cholesterol found in humans. In ocean sediments, algae sterols break down, leaving a chemical "skeleton" called a sterane.

Sepúlveda and Summons and their colleagues used high-resolution mass spectrometry to extract steranes and other biomarkers from the Fish Clay, which is a roughly 40-centimeter-wide layer in a seaside cliff at Stevns Klint, Denmark. It is a classic example of the geological ground zero of the K-P extinction event.

The research team detected a dip in sterane levels at the bottom of the Fish Clay – right after the meteorite hit. They take this as evidence of an algae die-off, but fortunately for these tiny plants, the worst of it was over in about 100 years.

But are these results representative of the whole ocean? Previous studies had found that life in the deep ocean didn't recuperate from the meteorite for millions of years.

"The signal from the Danish Fish Clay seems at odds with the oceanic signals," says Henk Brinkhuis of Utrecht University in the Netherlands. "One explanation might be that the Danish sections represent relatively marginal marine settings where regionally a lot of food and dead material was around, likely different from the true blue ocean."

However, another possibility is that the surface ocean really did recover rather quickly, but for some reason a lot less organic material sank to the deep ocean. This would make more sense with models of the meteorite impact that predict sunlight would be blocked out for only ten years or so.

"Once the sunlight comes back, there's really nothing we can think of to hold down the primary production," says Steven D'Hondt of the University of Rhode Island. "These microorganisms only need a few nutrients and some light to survive."