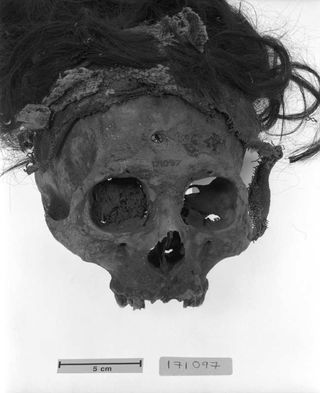 Nasca trophy head from a tomb at the site of Cahuachi.
(Image: © The Field Museum)

The ancient South American people who created the mysterious Nazca Lines — enormous etched images of everything from hummingbirds to orcas on the high Nazca Desert in Peru some 1,500 to 2,000 years ago, also happened to be regular collectors of human heads.

Scientists have long wondered if the heads, suspended from woven cords as trophies, came from enemy cultures as the spoils of war, were used in fertility ceremonies, or had some other purpose.

Researchers at the Chicago's Field Museum still haven't answered the "why" question about the taking of the heads, but they have solved the "where they came from" question.

Ryan Williams, a Field Museum curator, said that studies of the tooth enamel from 16 trophy heads in the Field collection and 13 mummified bodies from the same time period and region show that "the donors of the trophy heads were from the same place as the people who kept the trophies."

In other words, the heads came from people who lived in the same place and were part of the same culture as those who collected the heads.

The research, which also involved scientists from Arizona State University, Tempe, the University of Illinois, Chicago, and Indiana University, Bloomington, appears in the Journal of Anthropological Archaeology. The scientists said they are next turning their attention to determining why the Nazca people collected heads.