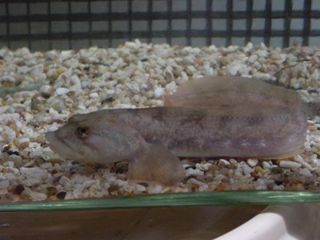 Warming oceans, one of the major consequences of global climate change, are making another marine species feel like a fish out of water, scientists report.

Biologists have known for years that global warming is linked to declining fish stocks, but a new study of eelpouts--big-headed fish that resemble eels--is the first to go deeper and see how warmer seas are linked to how fishes take in oxygen.

Scientists at the Alfred Wegener Institute for Polar and Marine Research in Germany studied the relationship between sea temperature and eelpouts counts in the Southern North Sea, combining data from the field with lab investigations of eelpout physiology.

The researchers not only found that the oxygen levels in the waters of the North and Baltic seas have dropped due to increasing temperatures over the past 50 years, a factor that reduces fish populations. They also found that eelpouts need more oxygen in warmer waters, a second factor that is reducing their numbers.

Difficulty in taking up oxygen via respiration and blood circulation, caused by the warming waters, proved to be the key factor in diminishing the size of the fish stock. ?

The study, published in the Jan. 5 issue of the journal Science, also noted that the population of eelpouts dropped as average summer temperatures increased. The impact was also observed in the short term such that eelpout numbers decreased the year immediately after a warm summer.

Animals tolerate a limited range of environmental conditions. Anything out of their tolerance window can cause damage. Fish in the North Sea have evolved to tolerate a wider range of temperatures than fish elsewhere due to the large seasonal fluctuations there. However, warming waters and their impact on oxygen supply can stress fish to the point that their thermal tolerance range is thrown off and they perish, the scientists said.

In the future, eelpouts could prove to be important bioindicators that would help experts assess what might happen to other marine species in the region, the scientists said.

Worldwide, warming waters can be expected to strain species that require lots of oxygen, forcing them to either relocate to cooler waters or face extinction, the authors write.