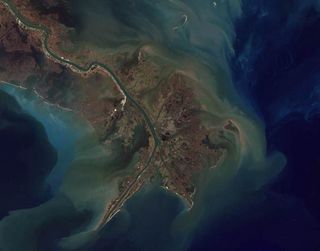 Rivers may be a significant source of the greenhouse gas nitrous oxide, scientists now find.

Their calculation suggests that across the globe the waterways contribute three times the amount of nitrous oxide to the atmosphere as had been estimated by the International Panel on Climate Change (IPCC), the United Nations scientific body charged with reviewing climate change research.

They found that the amount of nitrous oxide produced in streams is related to human activities that release nitrogen into the environment, such as fertilizer use and sewage discharges.

"Human activities, including fossil fuel combustion and intensive agriculture, have increased the availability of nitrogen in the environment," said Jake Beaulieu of the University of Notre Dame and the U.S. Environmental Protection Agency in Cincinnati, Ohio, and lead author of the paper published this week in the journal Proceedings of the National Academy of Sciences.

"Much of this nitrogen is transported into river and stream networks," Beaulieu said. There, in a process called denitrification, microbes convert the nitrogen into nitrous oxide (also called laughing gas) and an inert gas called dinitrogen.

The finding is important, the researchers say, because nitrous oxide is a potent greenhouse gas that contributes to climate change and destruction of the stratosphere's ozone layer, which protects us from the sun's harmful ultraviolet radiation. Compared with carbon dioxide, nitrous oxide is 300-fold more potent in terms of its warming potential, though carbon dioxide is a far more prevalent greenhouse gas. Scientists estimate nitrous oxide accounts for about 6 percent of human-induced climate change.

Beaulieu and colleagues measured nitrous oxide production rates from denitrification in 72 streams draining multiple land-use types across the United States. When summed across the globe, the results showed rivers and streams are the source of at least 10 percent of human-caused nitrous oxide emissions to the atmosphere.

"This new global emission estimate is startling," said Henry Gholz, a program director for the National Science Foundation's Division of Environmental Biology, which funded the research.

"Changes in agricultural and land-use practices that result in less nitrogen being delivered to streams would reduce nitrous oxide emissions from river networks," Beaulieu said.