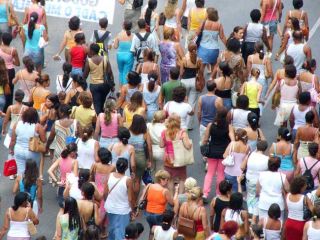 So much for the wisdom of crowds. People often become more confident in their beliefs when they find out the majority of others disagree with them, a new study finds.

"It may be that you feel proud, because you were able to disprove, in your own mind, an opinion that most people have accepted," said study author Richard Petty, professor of psychology at Ohio State University. "You actually become doubly sure you were right."

The results will be published in an upcoming issue of the Journal of Personality and Social Psychology.

Going against the crowd

Previous research has shown that majority opinion has the greatest influence on people when they consider issues that aren't that important to them or issues they don't want to spend much effort thinking about.

"If a decision isn't important, it often seems easiest to just go along with what everybody else is thinking," Petty said.

However, previous studies had focused on situations in which people found out the majority opinion before they had given the issue much thought. Petty and his colleagues tested out a scenario in which participants were allowed to ponder the issue before hearing the popular opinion.

They carried out a series of experiments involving undergraduate students in Spain. Students were told they would be examining the organizational conditions of an unfamiliar international company where they might be able to work for a future internship.

The students were then indicated how confident they were in the positive or negative thoughts they had listed, and then they rated their final attitude toward the company.

"People may be thinking that, 'If I can find the flaws in a position that the majority of people believe, then my thoughts must really be good ones,'" Petty said.

The results suggest how a person or organization could strategically reveal the majority or minority status of a proposal to achieve the maximum persuasive effect.

If you feel you have a weak argument, it should be best to suggest right away that a lot of people support your issue, before you make your case. The thinking goes, before people have a chance to ponder the decision they'll just "follow the crowd."

If you tell people you have majority support after you make your weak arguments, according to the new findings, it's too late — it will only serve to give people confidence in the negative thoughts they have generated about your cause, Petty said.

But for those with a strong argument, it can be helpful to reveal wide support for your proposal after explaining it, as this gives people confidence in their own positive thoughts, Petty said.

Petty conducted the study with Pablo Briñol, a former postdoctoral fellow at Ohio State, and Javier Horcago, both now at the Universidad Autónoma de Madrid in Spain.