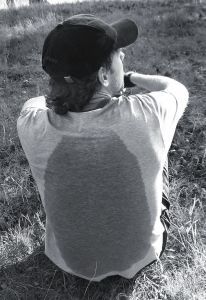 If you ever need to fill a swimming pool with sweat, and you need to do it in a hurry, you might enlist the entire population of Phoenix, Ariz., home to the sweatiest people in the nation.

Phoenix adult residents sweat so much that the city's perspiration could fill an Olympic-sized swimming pool in less than three hours.

For the second year in a row, Phoenix has earned the dubious honor of topping the Top-100 Sweatiest Cities list, a ranking of the nation's heaviest sweaters during the summer months as determined by researchers at Procter and Gamble.

During a typical summer day in 2005, an average Phoenix adult secreted 26 ounces of sweat per hour while walking outdoors. Phoenix's average daily ?temperature during the summer months—June, July, and August—for 2005 was 93.3 degrees Fahrenheit.

No. 100 on the list, San Francisco, checked in at a breezy 63.2 degrees during the same months.

Although Phoenix, Las Vegas, and Tucson have become fixtures atop the list, Austin and Shreveport are newcomers, rising from 21 and 25 last year, respectively.

The results were based on the amount of sweat an adult of average height and weight would produce while walking for an hour in the average high temperatures, according to NOAA data.

Sweating is the body's natural way of cooling itself down. As the sweat on your skin evaporates, it makes your skin feel cooler, said sweat expert Jay Gooch, who created the list. Sweating cools you because it takes energy to turn the liquid to gas, and that energy comes from your body's heat.

You might feel extra sticky on a high humidity day, but the extra moisture doesn't make you sweat, it just prevents you from getting cool. Because the air is already soaked with moisture, there's no place for the sweat on your arm to evaporate to.

Because humidity prevents you from cooling down, it feels hotter on a humid day than a dry one.

Top 10 U.S. Wireless Cities | The Most Dangerous Sports in America

Rounding out the top 100

Some of the differences from city to city are due to elevation and the city's layout. For example, people in Albuquerque, N.M. are probably sweatier during the hottest part of the day than their ranking of 49 on the main sweat index indicates, Gooch said.

Because of its nearly mile-high elevation and desert location, Albuquerque loses a lot of its heat during the night, lowering the daily average high that the ranking is based on.